by mvguide
in Art, Culture & Activities
0

Wasque Reservation — the legendary 200-acre spit of shifting sand and shoreline at the easternmost edge of Chappaquiddick — is a land in constant flux, its legendary sweep of beach, heathlands and maritime oak forest perpetually subject to the powerful forces of wind gusts and riptides.

Since 1988, stewardship of this changing land and sea has fallen under the purview of Chris Kennedy — an equally legendary force of steadfast kindness, knowledge (and mustache) who has served in many roles with The Trustees of Reservations, including as Islands superintendent. For more than 30 years, Mr. Kennedy has spent nearly every day managing a land that changes overnight. His stewardship is the one aspect of Wasque that remains the same.

“I come out here almost every single day, just to see the changes that have happened on the beach,” he said in an interview this week. “Wasque is the land of change. It’s exciting. And if you don’t like change, this is not the job for you.”

But now, the incomparable Mr. Kennedy, at 66, is ready for a change of his own. He will retire this summer, effective August 30, leaving a legacy in his own right that stretches far beyond this place that seems to sit at the edge of the world. Walking the beach as a late-day sun cast angles across the sand, Mr. Kennedy reflected on his three decades as the Island’s face of the Trustees, nearly 10 of them as Wasque’s live-in gatekeeper.

“Every day, you come back to Wasque, and you know it is going to be very, very different,” he said. “It’s a dream job . . . That is one of the things I love about it. But after 30 years, it is also one of the reasons I am looking forward to retirement.”

He began his career with The Trustees in the late 1980s, following four years of work as an assistant commissioner and chief administrator with the state Department of Wildlife, Fisheries and Environmental Law Enforcement. Originally from Foxborough, he had a long affinity for the natural world — and particularly the ocean. But his government job kept him on the road, away from his family.

One night, his daughter got sick and Mr. Kennedy was far from home, frantically trying to find out from his wife the location of his daughter’s hospital.

Mr. Kennedy said that the people, as well as the nature, has been the best part of the job.

“When I finally got back, my wife and I sat down, and we said, you know, there’s got to be a better way to live,” he recalled. “And so I started looking around, and then there was this organization that was advertising — an organization with a weird name called The Trustees of Reservations.”

Mr. Kennedy heard from colleagues that they protected land for public use and enjoyment. Today the Trustees manage over 100 properties and 27,000 acres of woodlands, grasslands, wetlands, coastal bluffs and barrier beaches throughout Massachusetts, including on Martha’s Vineyard.

“So I applied,” he said. “And they foolishly hired me. What the hell were they thinking? And it’s been a fun 32 years ever since. Every day is a new adventure.”

While most of the Island started working from home in mid-March, Mr. Kennedy has been doing it for years, living out of the limelight at the Wasque gatehouse where he maintains a watchful eye over his faithful domain. In the early years, he often walked on the beach late at night, experiencing the quietude and stars, visible only to him as the gatekeeper at the end of the Earth.

“It’s really just an amazing thing to witness,” he said. “You can sit here and see the glow from Nantucket, and the glow from Hyannis, and yet above, there is no light at all, other than the stars. It is such a neat place.”

He has served in a variety of roles with the Trustees, including executive director for Martha’s Vineyard and Nantucket, and currently as down-Island stewardship manager — allowing him to focus specifically on the globally rare and fragile Chappaquiddick properties at Wasque and Cape Pogue.

Wearing his familiar tucked-in collared tee and khakis, he has spent the past 30 years doing the grunt work of a beach manager, organizing rangers, cordoning off eroding coastline, writing grants and dealing with swimmers. But he has also been doing the grunt work of a committed conservationist, uncovering World War II bombers and bombs, freeing common terns from balloon ribbons and wrestling with entangled sea lions. Hundreds of them. 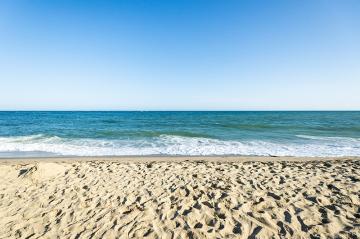 He speaks for the trees and beaches.

“I wish I had a nickel for every seal pup that I’ve tackled and taken netting or monofilament off,” Mr. Kennedy said. “It’s a wonderful feeling — except they have this awful tendency to poop on you.”

He said his favorite part of the job has been the people — and it shows. A generation of Vineyard conservationists have come of age under his leadership. They include Suzan Bellincampi, executive director of Felix Neck Wildlife Sanctuary; Tom Chase, who spent years heading the Island chapter of The Nature Conservancy; Matt Bass, a former environmental police officer on the Island; and Antone Lima with the land bank. All served as Trustees rangers under Mr. Kennedy before going on to their other jobs.

But influence and legacy is something Mr. Kennedy said he learned from his predecessors — former executive director David Belcher and the original superintendent at Cape Pogue, the late Foster Silva.

“When you come right down to it, we aren’t managing wildlife,” he said. “We’re managing people. That’s what we do in this business. And they do an excellent job of it. And, so, you know, I hate to talk about legacies, but it’s nice to know that there are people like that who are still there to take up the gauntlet.”

But managing people remains a delicate balancing act between public access and conservation, a threat that looms more heavily over Wasque than any shark or storm. In the three decades Mr. Kennedy has worked with The Trustees, the remote Chappaquiddick beaches have become immensely popular, attracting hundreds of thousands of visitors each year since the 1980s. The Trustees sold more oversand vehicle permits in July of this year than they did through all of August last year.

Yet just as the popularity of Wasque has skyrocketed, so too have threats to its ecology. Rare and endangered shorebirds like piping plovers — inhabitants of Wasque long before humans and fewer in number than African elephants — have dwindled to record lows, prompting controversial annual beach closures about 15 years ago to protect the Lilliputian fauna. Mr. Kennedy and staff received death threats.

“At one point we had police protection,” he said. “[Beachgoers] felt it was a God-given right. Who are you to tell me I couldn’t drive on the beach? It was a really difficult time. But time went on. And people realized that they should not be surprised that the beach closes every July. And they’ve learned why, too.”

And as Wasque grows in popularity, it continues to shrink in size — for both people and plovers. What was once nearly 100 yards of sweeping white sand and coastal dunes has been shaved to a mere grassy sliver by the point’s Aeolian winds and powerful long shore currents — exacerbated in recent years by the combined forces of human activity and climate change.

On Tuesday afternoon, tropical storm Isaias brushed past the Vineyard, eroding the very ground Mr. Kennedy had stood on only one day prior. Wasque Reservation has lost hundreds of acres of land since 1980.

“That’s one of the big changes over the last 32 years, is that I think we had heard whispers of something called sea level rise, and climate change, 32 years ago, but not the drumbeat that you hear today,” Mr. Kennedy said. “So we’re managing a property that is much smaller than it was when I started. And thank God they haven’t cut my salary.”

When Mr. Kennedy steps away at the end of August, he plans to leave the Island as well — moving to a family property in Provincetown. He has a wife, Carol Ann, three children and two grandchildren, ages one and three, whom he hopes to spend more time with. There is a long-dormant commercial lobstermen’s license, including almost 200 pots, that he plans to revive.

Mr. Kennedy is confident that the properties will remain in good hands. And he suspects that no person has walked along the shores of Wasque more in the past 30 years than he has, his footprints the one constant on a beach that sees only change. And as he takes his next steps elsewhere, the imprints of his old ones remain, despite an unrelenting sea.

Ever dreamed of living inside a work of art, like a Harry Potter character or the woman from a-ha’s...

We asked readers for their favorite poems. Here’s what they shared.

After Amanda Gorman captivated America last month with her poetry during the inauguration of President Joe Biden, we asked...

Boston Dynamics loves to show off the many abilities of its doglike robot, Spot: Jumping rope. Dancing. Politely holding...