Fifty-six years after sailing into the Vineyard Haven harbor for the first time, Shenandoah ­— the one-of-a-kind, square-rigged topsail schooner ­­— has almost never left the Island without her designer and captain, Robert S. Douglas.

Shenandoah has had an educational mission for the past 30 years that will continue under new ownership.

Half a century later, that is set to change for the longest-serving schooner under one command in the American coastal-cruising business. The Shenandoah won’t be leaving the Island. But she is going to have a new captain. Mr. Douglas, who is 88, announced on Thursday that he would be donating the ship to FUEL, a Vineyard-based nonprofit dedicated to maritime education and headed by longtime Shenandoah shipmates Ian Ridgeway and Casey Blum.

Mr. Douglas and FUEL (which stands for the Foundation for Underway Experiential Learning) have signed a letter of agreement to donate the vessel, according to Mr. Ridgeway. The nonprofit will officially take ownership of the storied schooner when it reaches its $500,000 fundraising threshold. Mr. Ridgeway announced Thursday that the FUEL has already raised approximately $350,000.

“The stars just kind of aligned that this was the right time for [Captain Douglas] to pass down the boat and its programming,” Mr. Ridgeway said. “And he was eager to have two people like Casey and me that he trusts with that.” After a half century of plying the Vineyard waters with coastal charter cruises and educational programming for Island kids, the Shenandoah’s historic donation marks the end of an era for one storied sea captain — and the beginning of a new one for its other two, who hope to continue and expand the unique, experiential learning that has occurred onboard for the past three decades.

“We’re super excited,” Mr. Ridgeway said. “There’s just been so much bad news this year. And Shenandoah and Alabama are sitting out there without the flags flying. I just think it’ll be so cool.” The 108-foot schooner that has become an icon in the Vineyard Haven harbor has been shut down since the pandemic began, unable to offer the weeklong educational voyages that serve as a rite of passage for all Island fifth graders.

Mr. Douglas said financial concerns caused by the struggling charter business, as well as a desire to finally pass the gallant to two sailors who came up through the boat’s “hawsepipe,” as he said in a press release announcing the decision, prompted him to donate the boat. 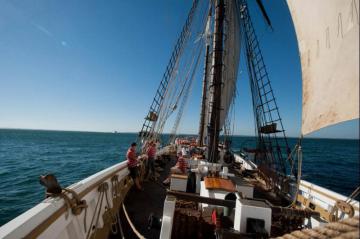 Topsail schooner was designed by Captain Douglas in 1964.

He said he didn’t mind the tax writeoff, either.

“It would be accurate to say that [Mr. Ridgeway] has a soft spot in his heart for Shenandoah,” Mr. Douglas told the Gazette in an interview this week. “It’s an ideal situation.”

Mr. Ridgeway and Ms. Blum, who is a licensed certified social worker, said when the pandemic subsides they hope to immediately continue the educational voyages for children, which they both attended themselves, as well as expand programming for young adults. The Shenandoah has hosted more than 5,000 kids, according to the press release, including nearly every Islander today between the ages of 11 and 36.

Captain Douglas said he plans to stay involved as much as possible — even at the age of 88.

“You won’t see any difference,” he said. “Every summer’s been on my boat for 55 years . . . Most people don’t stay in the same business for 55 years. And usually boats don’t last that long either.”

The Shenandoah has a long and storied history on the Island, arriving in 1964 after Mr. Douglas oversaw her construction at the Harvey F. Gamage Ship Building Co. in Maine. Modeled after the Joseph Lane, a nimble, 19th century revenue cutter, Mr. Douglas modified her lines and rigging, without any professional boat-building experience or education.

The Vineyard awaited the arrival of the peculiar, “extreme clipper” with bated breath, according to a February 1964 story in the Gazette. 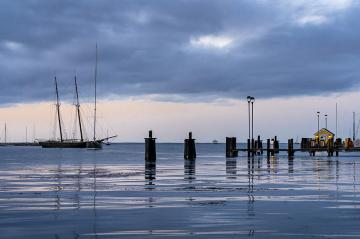 “Vineyarders look forward with great anticipation to that day sometime in June when the beautiful Shenandoah, complete with masts, spars, and sails will sail into Vineyard Haven harbor, her home port,” the newspaper wrote.

After construction, Shenandoah became only the second schooner built new for the charter business in the 20th century, ­and only the second commercial sailing ship built without auxiliary power in the United States since 1921. And while she has shifted away from the adult charter business and toward youth educational programming in recent years, Shenandoah is still considered to be the only schooner in the world of her size and topsail rig without an engine.

But the unique wooden schooner needs work, according to the Coast Guard ­— which factored into Mr. Douglas’s decision to make the donation. The $350,000 already raised by FUEL will partly go toward repairs that the Coast Guard has deemed mandatory to keep the vessel afloat, including fresh equipment and a new suit of sails. Mr. Ridgeway said he is in communication with the Coast Guard, and hopes to complete the repairs this winter.

In fact the Coast Guard represents a painful reminder for the swashbuckling Captain Douglas — who has never forgotten that it took the maritime law enforce agency an entire year to grant the Shenandoah a license to carry passengers back in 1964.

But now, the Coast Guard is FUEL’s problem — and neither Mr. Ridgeway nor Mr. Douglas could be happier. 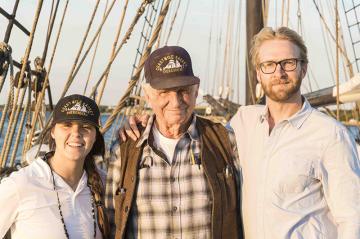 Mr. Ridgeway said FUEL has the eventual goal of constructing a sturdier, more deep-sea worthy version of Shenandoah — a sort of Shenandoah 2.0 — that Mr. Douglas has designed and could be used for semester-long, college-accredited voyages. Meanwhile, the organization hopes to use the current Shenandoah to develop programming, as it continues to raise money for her successor.

Mr. Douglas said the 50 years he spent as captain of the Shenandoah, and in particular the 30 or so years he has spent using it for youth educational programming, have amounted to his life’s work. It’s all he could have hoped for, he said — and he was thrilled that it would continue.

“If I could do anything unusual, I would bonsai people — to keep them all eleven years old,” Captain Douglas said. “But the life cycle of people, and the equipment, and jobs, all of it goes through change, and a lot of time boats end up in the scrapyard . . . We’re going to keep that sort of thing from happening to her.”

But when asked how he felt about giving up the Shenandoah after 56 years, Mr. Douglas responded in the way any captain would — especially the captain of a boat that has known no other master.

Donations to the Shenandoah Campaign can be made by visiting www.ShenandoahFund.org, or contacting Ian Ridgeway via email at ian@fuelprogram.org.

North Carolina presidential ballots are being sent out. What you need to know about Election Day - News - capecodtimes.com