The bell will ring and the first fish will cross the scale Sunday morning as usual. But beyond that, little will be as usual when the 75th Martha’s Vineyard Striped Bass and Bluefish Derby gets under way.

For starters there will be no striped bass in the tournament this year, a decision made by the derby committee early this year to help the recovery of a species in decline.

And due to the pandemic, no crowds will be allowed at the weigh station. Masks will be required for fishermen weighing in their catch, which will be dropped off at the door of derby headquarters. Even the free coffee traditionally provided for bleary-eyed anglers will be missing.

But there will be plenty of fishing — and for derby organizers and the hundreds of longtime fishermen who participate in the venerable saltwater competition, that’s the only tradition that really matters.

“We wanted to do everything that we could to make this happen,” derby chairman Joe El-Deiry said this week. “I feel like the Island could use something to look forward to. Even though it’s not going to be your typical derby where people are hanging out at the weigh station, drinking coffee and telling fish stories there will still be a really cool feeling around the fact that there is an event happening and there will be something to talk about.”

“It’s going to be good no matter what it is,” said Cooper Gilkes, owner of Coop’s Bait and Tackle in Edgartown. “Everybody’s fighting hard to keep it going, that’s the big thing.”

Stephen Morris, owner of Dick’s Bait and Tackle in Oak Bluffs, was even more direct. 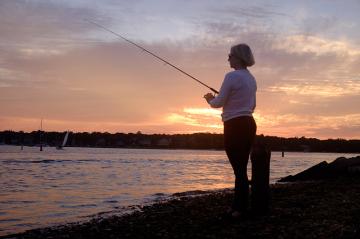 “Thank god we’re having it,” he said.

As of Tuesday this week, between 600 and 800 fishermen had registered for the tournament, according to Mr. Morris. Exact numbers would not be available until Saturday when registrants pick up their pins, he said. Most registration has been online this year due to Covid-19.

But perhaps ironically, the biggest change in the derby this year is unrelated to the pandemic. In late January, the derby committee voted to remove striped bass from the tournament. The decision was made to aid the dramatic decline in striped bass stocks that has been documented all along the Eastern seaboard.

“It was definitely the right thing to do,” Mr. El-Deiry said of the decision to remove bass from the competition. “The fish need our help and that’s one small way we can take a little pressure off the species until hopefully numbers get better and we’re able to reintroduce them.”

That leaves bluefish, bonito and false albacore (albies) in the tournament. 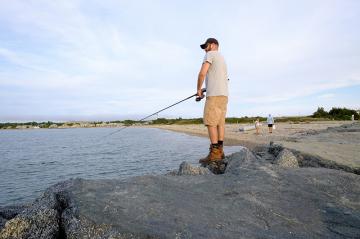 “It’s going to be an interesting year just because of the stripers being out of it, that sort of changes the dynamic,” said Peter Sliwkowski, owner of Larry’s Bait and Tackle in Edgartown. “Everything shifts more towards dawn and dusk and chasing albies. So, going in we kind of know it’s going to be unique.”

Many more changes have been adopted due to the coronavirus and the need for social distancing. There will be no awards ceremony, mystery prizes, top rod awards or super Saturday events. Nor will there be a kids derby, traditionally held at the Oak Bluff Steamship Authority wharf.

However, there will still be daily and weekly prizes, and a triple crown award instead of a grand slam. There will only be one grand prize this year — a 19-foot Cape Codder boat loaded with options, a Tohatsu outboard motor and a trailer. Absent from the prize pool is a new vehicle. Because of this both shore and boat fishermen will have the opportunity to win the boat.

“I know a lot of people that fish on their friends’ boats that are pretty excited about that,” Mr. El-Deiry said.

The logistics of the key ceremony are still being determined. 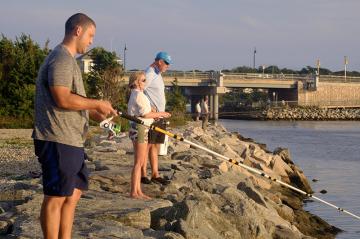 Under the drawbridge, they’ll be fishing till dawn.

There will also be changes at derby headquarters, located at the foot of Main street on the Edgartown Harbor. Fishermen will no longer enter the weigh-in station, instead presenting their fish at the door to be weighed. Everyone will be required to wear a mask and in order to discourage congregating at the weigh station there will be no leaderboards (they will be online), merchandise for sale or coffee served.

Early reports on the water are that the bonito have arrived but aren’t biting much, bluefish are plentiful farther out but not yet near shore in any large size. And the albies are running.

“Albies are the most exciting,” Mr. El-Deiry said. “They get people’s blood flowing more than anything else.

In past years, gnomes have been known to appear on the Polly Hill Arboretum grounds, and it has become...