John Early, the former longtime West Tisbury selectman, Island builder and community activist, died Friday night, his family confirmed. He was 74 and had battled Parkinson’s disease for many years.

He had deep family ties on the Vineyard that went back for generations, and had been a year-round resident since the 1970s, when he began a life of work and public service that would continue for decades.

“I can’t quite figure out how I got involved with so many organizations,” Mr. Early said when he was honored with the Spirit of the Vineyard award in 2014. “But I guess it’s because I never figured out that ‘no’ is a complete sentence.”

He founded his own contracting business in West Tisbury, served as a West Tisbury selectman for 30 years and sat on the Martha’s Vineyard Commission for 20 years. He was a volunteer firefighter for 40 years, including as assistant fire chief, served as president of Island Elderly Housing for 14 years and was the former president and longtime board member of Vineyard House, the Island’s only sober living community.

His life in community service was forged at a young age, when he joined the Peace Corps in 1968 after graduating from Cornell University with a degree in political science. He was part of the 70th Peace Corps group to go into India which was suffering from terrible drought when Lyndon Johnson was president. He thought he would go back to India; instead he came to the Vineyard and never left. But the lessons he learned there stayed with him.

“I learned how to deal with people,” he told the Martha’s Vineyard Magazine in a 2012 interview. “I learned when not to talk.”

He moved to the Vineyard year-round in 1975, where his family ties dated to the 1920s, and began work as a carpenter, learning on the job. In 1988 he incorporated his company John Early Contracting, which remains one of the largest contracting companies on the Island today.

He ran for selectman in 1977 as a write-in candidate, won and stayed on the job until 2007. The West Tisbury town report was dedicated to him that year. He was humorously remembered as the selectman who wore shorts all year-round, barring snow. 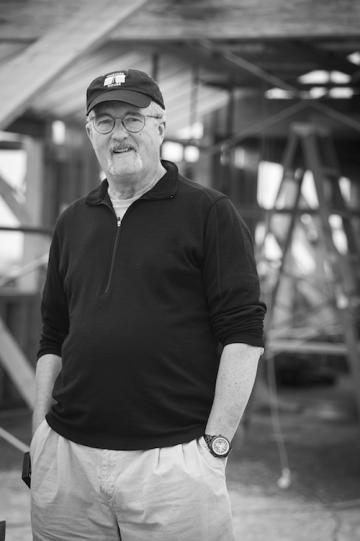 “I just wear shorts because I hate long pants . . . and I have a heater under my desk,” he said in the magazine interview.

“John served West Tisbury and the Island community in countless capacities, yet was somehow always there when you needed him,” it said in part.

“We know we speak for former and current West Tisbury town officials and staff when we say John will always be remembered for the dedication, guidance and deep love he gave to our community.”

Over the years Mr. Early watched the Vineyard change from a quiet backwater to a fully developed summer resort.

“I saw West Tisbury go from a little tiny hamlet to a real political subdivision,” he said.

It affected his work. “It used to be a handshake and people would wait for us,” he said of contracting. “I used to do the whole thing myself. Now I’ve got people doing it for me. My biggest problem is letting them.”

As change swirled on the Vineyard, Mr. Early deepened his commitment to community causes, including affordable housing. He was an early advocate for youth lots, and pushed for rental subsidies and other measures to stem the growing gap on the Vineyard, as working Islanders were increasingly squeezed out of the housing market.

“It really needs to be well thought out and universally applied so that it hurts everybody equally,” he said in the magazine interview. “I’m not a tree-hugger by any stretch, but I do feel a responsibility to try to not be part of the problem.”

At the time of the interview, Mr. Early had been diagnosed with Parkinson’s, a degenerative neurological disorder which has no cure. He was sanguine about it. And he spoke frankly about learning from his missteps in life.

“I’ve made every mistake there is to make, at least once,” he said. “If you show me somebody who’s not making any mistakes, I’ll show you someone who’s not working too hard.”

Arrangements are incomplete; a full obituary will appear in a future edition.