There is some good tape work down at derby headquarters on the Edgartown harbor, yellow arrows pointing the way fishermen should walk to weigh in their fish, black X’s marking where to stand for social distancing.

The taping was done by derby committee member Leah Fraumeni. At 7 a.m. on Sunday morning she was walking the perimeter, smoothing out tape, hanging up a few more signs and wondering what the first weigh-in of the 75th Martha’s Vineyard Striped Bass and Bluefish derby would bring.

Usually the main event on the first morning are striped bass, she said, because they are caught at night. But this year, with striped bass out of the derby, she didn’t know what to expect.

Serena Ward with her son Aaron and her 8.4-pound False Albacore, the first fish weighed in for the 75th derby.

At 8 a.m. the weigh-in station doors were opened and derby president John Custer rang the bell that officially declared the derby underway.

“Good morning everyone and thank you for being here” he said. “Thank you to the Vineyard community for holding the 75th Martha’s Vineyard Striped Bass and Bluefish Derby and thank you to all the fishermen for their safe participation this year.”

“And a special recognition to Roy Langley,” he continued, referencing the longtime bell ringer who died that night.

No fish, no one waiting in line, the committee members and gulls vastly outnumbering spectators. The lull continued until about 8:30 a.m. when Bob Dobias, co-owner of Cape Codder Marine rolled in pulling the grand prize boat. Mr. Dobias has been donating a boat for the last five years, he said. Before that he had never been to the Vineyard.

“I had never even heard of the derby,” he admitted before he got a call asking if his company would donate a boat each year. 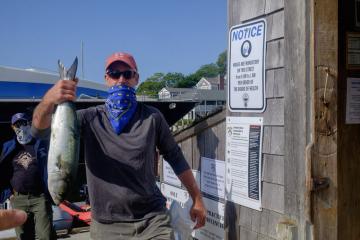 Chuck Winter weighs in a 4.44-pound bluefish for the second fish of the day.

“Well, there’s the catch of the day,” someone remarked, watching Mr. Dobias park the boat next to derby headquarters.

Not so fast, said Serena Ward who pulled in behind the boat carrying an 8.4-pound albie, the first fish to be weighed in at the derby. It is Ms. Ward’s first derby and her first albie, which she caught from shore near West Chop, while fishing with her husband Jesse Ward.

“It almost took my arm off,” she said. “He was tail wrapped,” meaning the fishing line had wrapped around the tail making it even harder to pull in the notorious fighting fish.

“And then we saw a shark,” she continued. “It was easily seven-feet long in about two feet of water, just cruising along.”

“I’ll see you again soon,” she called out to the weigh masters before heading off in search of breakfast with Jesse, her son Aaron and their Australian shepherd, Freebie.

Quiet settled in again on the harbor. It was a bit like land fishing, heads jerking up when trucks rolled by as if they were birds circling above a school of baitfish. But mostly it was a lot more talk than action. 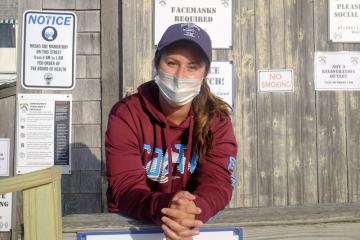 Mr. Custer brought up his other job, principal of the Tisbury School, and the added pressures this year.

“The kids will be fine,” he said. “They are good at adapting. It’s us adults who have a tougher time with change.”

With his derby and school responsibilities, Mr. Custer said he doesn’t have time to fish the derby but he will wet a line come October.

Committee member Cosmo Creanga said he usually takes the whole month off from work to fish the derby.

Mr. Creanga grew up in Romania and moved to the Island about 15 years ago. He’s a builder and usually monitors his financial progress all summer making sure he can take the time off to fish. But not this year. 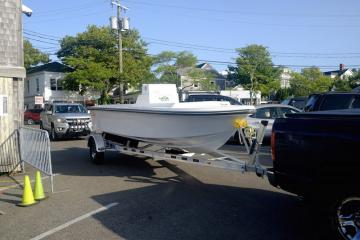 “This year is too busy,” he said. “So many people are staying because of the pandemic, I have too much to do to take time off.”

Tucker the dog, a perky white Westie, wandered up the weigh-in ramp followed by his owner Gail Morey, whose husband and son were out fishing but having no luck.

“He would have weighed in heavy today,” Ms. Morey said of Tucker. “Probably about 16 pounds.”

Filet master Tim Sheran killed time working on Ms. Ward’s albie. Known as much for their terrific fight as their terrible taste, albies don’t get donated to the senior centers around the Island like the other fish will.

“The belly is good for lobster bait or bottom fishing,” Mr. Sheran said.

Then, without a word or shout, Chuck Winter showed up holding a 4.44-pound bluefish he caught on Chappy near Leland Beach. Mr. Winter and his buddies come up from Danbury, Conn. every year to fish the first week of the derby. They will spend the rest of the week prowling the beaches of Edgartown and up-Island at Dogfish Bar or Lobsterville Beach, he said.

His weigh-in complete, Mr. Winter headed out quickly, looking to get more fishing in during his one precious week on the Vineyard.

At 10 a.m. Mr. Custer returned to the door of the weigh-in station to close up shop until this evening when it opens again at 8 p.m.

“I didn’t even know Roy had died when I gave that shout-out to him at the opening bell,” he said. “I knew he was doing badly and I was thinking about him and wanted to mention him.”

Mr. Langley’s daughter had come up near the end of the weigh him to give Mr. Custer the news.

“He was a Derby Hall-of-Famer, a weighmaster but most of all he was the bell ringer,” Mr. Custer said. “He loved the derby.”

A large private party planned for President Obama’s 60th birthday on the Vineyard this weekend has been canceled amid...

Many people have heard of Iggy’s Bakery if you’re from Boston or the surrounding area. There is an Iggy’s...