Martha’s Vineyard towns are seeing a boom in residential construction projects, as building demands soar both up-Island and down. And while the majority of the activity appears to be in renovations — some of them massive — new construction is on the rise in some places too, Island building inspectors told the Gazette in recent interviews.

Renovations — sometimes massive — account for much of the activity.

The driving force behind the surge is the booming real estate market on the Island, inspectors said.

During the early days of the pandemic, a months-long construction ban halted nearly all work Islandwide for much of the spring. But when the ban was lifted near the start of summer, the demand for building permits fairly exploded and has continued with no letup, according to a wide array of reports, both data-driven and anecdotal. Residential building permit applications began to surge beginning around July, while throughout the summer downtown streets could be seen lined with construction vehicles and pickup trucks, a trend that continues into the fall.

Numbers tell part of the story.

Edgartown building inspector Reade Kontje Milne said during the height of the lockdown from March to June, the town issued 159 building permits, 121 fewer than the same time period last year. But by mid-summer, activity had picked up and has remained steady ever since, Ms. Milne said.

From the start of July through the end of September, Edgartown issued 200 building permits, with 51 issued in July, 48 in August, and a staggering 101 in September. By contrast, the town issued 172 permits during the same period last year, recording 40 permits in July, 53 in August and 79 in September.

The mid-summer surge came as a surprise to Ms. Milne, who said the annual influx of seasonal residents and renters has historically made summertime somewhat of an off-season for building.  “The pattern changed a little bit because of the construction ban, it just pushed everything back,” she said. “Normally we would see some quiet time in July and August, we just really didn’t feel that.” Tisbury building inspector Ross Seavey reported a similar trend. Mr. Seavey said he issued an unusually high volume of building permits this summer, beginning with 30 permits in July, followed by 31 in August and 45 in September. Last year, he issued 20 permits in July, 32 in August and 28 in September. Mr. Seavey also estimated that applications for permits were up this year by about 10 permits in the months of June and July respectively. 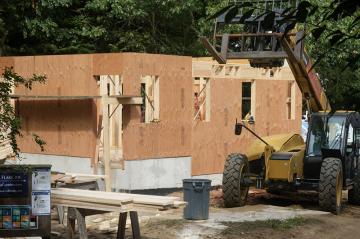 Island building inspectors say they see no letup in sight.

“It’s rare for this department to be issuing over 30 permits a month for months in a row,” Mr. Seavey said in an email. “In the past, an uptick month is usually followed or preceded by a lower month or months.”

West Tisbury building inspector Joe Tierney said the summer surge in his town was intensified by a pile-up of projects already in progress prior to the pandemic.

The town issued 64 new permits over the months of July and September, including minor work permits and gas and wiring permits. But many permits from 2019 — 400 building permits were issued between March 1 and Sept. 30 of last year — have just now reached the building stage, pushing the total volume of building activity higher still, Mr. Tierney said.

Mr. Tierney said West Tisbury too is seeing activity across the board.

“There’s been a real smattering of

things — people putting in decks, basements, recreation rooms. It’s a little bit of everything,” he said.

The scale and scope of building projects have also been larger on average this year, building inspectors said. 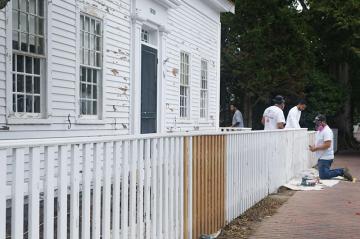 As homes change hands at a steady clip, renovations, additions and new construction are on the rise.

“What feels the most dramatically different to me is the scale of project is really changing,” said Ms. Milne, noting a trend in Edgartown toward larger, more involved projects that has grown over the past few years.

“We have more enormous, complicated compounds that are that are going in . . . And with something like that, while it might look like one more permit, the building, the plan review, every inspection, actually takes up a lot more time because of the scale of these projects,” she added.

As for the residential construction surge, it is a direct outgrowth of the recent burst in real estate sales activity on Martha’s Vineyard, inspectors said.

“What we have is a lot of inquiries from real estate agents because there are a lot of transactions happening,” said Ms. Milne, who expects requests for renovation projects of all kinds in

the coming months. “I think we’re both kind of anticipating that kitchen remodel, bathroom remodel — all of those things are probably coming down the pipeline,” she said.

Edgartown has issued permits for 35 more residential additions or alterations this summer than last, according to department reports.

Mr. Tierney echoed Ms. Milne’s comments. “There’s more to come this fall because of the real estate market,” he said. “People will want to do alterations and renovations.”

Most towns report a sharp increase in outdoor renovations and expansions in particular, such as guest houses, deck repairs — and most notably, installing pools. 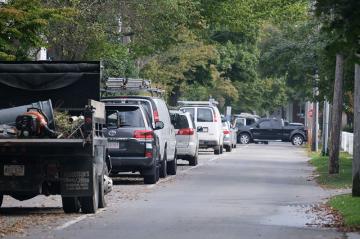 In West Tisbury, Mr. Tierney said he saw a marked increase in the number of pool houses constructed this summer, while in Tisbury, Mr. Seavey speculates that the number of pools installed surged from a typical one per month to about three or four a month this year. In Edgartown, 11 new pools were installed in the month of September alone, compared with a single pool installed last September.  Island contractors and landscapers are on the front lines of the demand, scrambling to keep up with it all. Fred Fournier, who owns Landscope, an Edgartown-based landscape design company, estimated that business is up 40 or 50 per cent this year from last year. Employees in his company’s maintenance and construction teams are working on anywhere from 15 to 20 projects each day, he said. And work on some larger scale and longer-term projects is expected to continue through 2023, he added.

“We’re extremely busy,” said Mr. Fournier. “The real estate market is gangbusters, people are buying houses, people are buying second homes, and third homes. And with that, they do interior restorations, they do additions, but they also do major exterior work . . . People are expanding on their exterior spaces, absolutely, a thousand-fold.”

Building inspectors said there appears to be no letup in the horizon.

“There was that initial increase and we’ve kind of stayed at that plateau, things haven’t dipped back down to kind of our normal levels,” Mr. Seavey said.

Ms. Milne agreed. “I think there’s steady growth going on in the construction industry. That’s what it feels like,” she said. “I don’t see it slowing down, just from looking at what’s out there, it seems like it’s going to continue.”