When congregations return at last to Union Chapel in Oak Bluffs, they will be greeted by an old acquaintance as they’ve never seen — or heard — it before.

After presiding over the historic wooden octagon for more than 95 years, the chapel’s 1924 Austin electro-pneumatic organ has been fully restored, cleaned and reinstalled by the Spencer Organ Company of Waltham.

In the process, technicians returned the organ’s original facade of wooden and metal pipes, which had been pared back during the minimalist mid-20th century.

In place of the silver-toned frill familiar to generations of chapel-goers, a wide rank of pipes in burnished brass now runs across the organ loft, visually unifying the central chandelier and the simple cross on the wall behind the lectern below.

Work was interrupted during the pandemic but began again this summer.

Bracketing the gleaming tubes, square wooden pipes that formerly were painted sea-green have been polished to a shining grain.

The sound of the instrument has been updated as well, Union Chapel music director Bill Peek told the Gazette last week as Spencer technicians put the finishing touches on the reinstalled organ.

“They go through every single note, probably close to a thousand pipes, and they adjust the sound on each pipe. It’s called tonal finishing,” Mr. Peek said. “I can tell you already it sounds great.”

The Spencer crew also completely rebuilt the organ console, which has two manual keyboards, a pedal board played with the feet and a series of controls called stop tabs, which when engaged produce the sounds of trumpets, woodwinds and other instrumental voices.

“You’re creating your own little orchestra there, by combining the different sounds,” Mr. Peek said. “It’s more complicated, in a lot of ways, than playing the piano.” 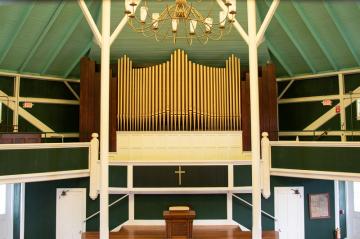 The folk term “pulling out all the stops,” for going to extremes, comes from organ playing, he added. “On this organ we have stop tabs. You press them down and push them back up. In the olden times, and still today for a lot of organs, you had stop knobs that you pulled out.”

Pulling out a stop opens an air passage from the wind chest (electrified, in modern organs) to the pipes, he explained.

“Pulling out all the stops means you put everything on. Everything on the organ plays, and it plays very, very loudly. It’s one of the few organ expressions that’s made its way to the common vocabulary.”

Spencer began its work on the Union Chapel organ more than a year ago, in September 2019. As a non-essential business during the pandemic, the organ company was closed in March, but founder Joseph Rotello and his crew returned in June and again last month to continue the project.

“From everything I can see, they did a beautiful job,” Mr. Peek said. “The final part that is exciting is when you hear what it sounds like and how it can interpret music.”

Mr. Peek said the Spencer crew will be back again next spring for final adjustments to the organ before a hoped-for return to services at Union Chapel, which celebrates its 150th anniversary in 2021.