A sizable crowd of veterans and onlookers gathered in Ocean Park Wednesday morning under gray skies and warm temperatures for a ceremony in honor of Veterans Day.

With six feet of space between them, veterans from all branches of the military assembled for the ceremony.

A traditional parade from Nancy’s Restaurant to Ocean Park was canceled this year due to the Covid outbreak.

VFW Post 9261 quartermaster Peter Herrmann welcomed his fellow veterans, their families and everyone else who came out to show support. Mr. Herrmann recited the Pledge of Allegiance and said he felt very fortunate “to be with such a distinguished group that we call veterans.”

“On this day and every day, I’m proud to say I’m a veteran and I’m honored to be here with my brothers and sisters,” Mr. Herrmann said. “Let us never forget those veterans who have gone before us and always honor all veterans.”

“Citizenship is not a right, it’s a responsibility and we’ve chosen to exercise our responsibility by serving in the uniformed services,” Mr. Berube said later, after the ceremony.

The crowd stood for a moment of silence to honor Allan (Buddy) deBettencourt, an Island veteran who passed away Tuesday. 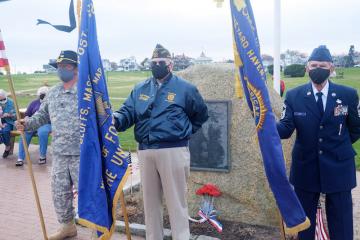 There was a moment of silence to honor Allan (Buddy) deBettencourt, an Island veteran who passed away Tuesday.

Ms. Murphy said the Veterans Day celebration in Ocean Park dates back further than when she first got involved in 1982. She was happy with the turnout and glad the rain held off until the afternoon.

“I think we all needed this,” she said.

As Chief McNamee finished he walked deeper into Ocean Park, the sound of his bagpipes slowly faded as the southeast winds carried the tune out to sea.