Thanksgiving weekend brought the usual holiday shoppers to down-Island towns, though not in the numbers and density of pre-pandemic seasons.

“It was good, but certainly not a typical Black Friday weekend,” said Sarah York, president of the Vineyard Haven Business Association and manager of C.B. Stark on Main street. “It doesn’t rival what we would be used to.”

Covid-19 prevention measures have nixed the customary early-morning sales and timed specials that drew lines 50 people long at shops like Rainy Day and the Green Room in past years, Ms. York said.

“We weren’t allowed to do any of that stuff, and it didn’t seem appropriate or safe,” she said.

Instead, the retailers extended their Black Friday sales to the full weekend, Ms. York said.

Vineyard Haven merchants also are getting extra festive with their holiday decor, decking their establishments both inside and out as well as the street itself.

“We’ve really upped the ante,” Ms. York said. “Ernie Boch, Jr. has donated a large sum of money to the business association to decorate town, so we were able to purchase a lot more lights and a lot more decorations than we would otherwise have been able to do.”

It’s all in accordance with the association’s holiday message, she said. “Our theme this year is ’Tis the season to keep the lights on.’”

Oak Bluffs got its glow on over the weekend, flipping the switch on the annual Ocean Park display of lights by Crossland’s Nursery. A highlight of every Christmas season, the colorful lights make impressive drive-by viewing and the park is spacious enough for socially distanced groups to get a closer look.

Also in Oak Bluffs, Robert Gatchell has once again transformed his County Road home into a drive-through Santa’s Workshop, blazing with lights, decorations and child-pleasing scenes. Mr. Gatchell asks viewers to donate a non-perishable food item for the Island Food Pantry as they roll through his display.

As Edgartown municipal workers strung wiring for the town’s annual Main street mini-trees, a pair of freshman retailers on Dock street took matters into their own hands to create a mini-North Pole at the end of Mayhew Lane. 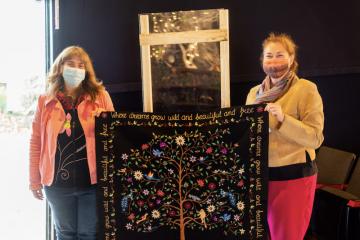 Lucy Dahl of Untameable Gallery and Grace Romanowsky of Sea Legs, both of whom opened their businesses this year, teamed up to add trees, greenery, lights and other decorations outside their facing shops.

A lighted sign above the gallery window read PEACE, and a child-sized red postal box outside Sea Legs was labeled Letters for Santa. Bright white bulbs crisscrossed the street from roof to roof.

The retailers also secured permission from the Edgartown Yacht Club to allow a pop-up shop under a tent on its property next to Sea Legs, where Chappaquiddick woodworker Zach Pinerio sold his bowls and other wares made from reclaimed Island wood.

For Christmas in Edgartown, the weekend of Dec. 11 to Dec. 13, Mr. Pinerio will be back and Ms. Romanowsky and Ms. Dahl have ordered a Santa cut-out for Covid-safe family photos.

That same weekend in Vineyard Haven, a 4 p.m. Saturday drive-through giveaway will give about 200 people the chance to grab a bag of coupons that may also include a big-ticket item from a local store, Ms. York said.

“You could get something really nice,” she said. The drive-through will also feature holiday light projections arranged by Copper Wok owner J.B. Blau, Ms. York added.

And there will be snow: The Vineyard Haven business association has purchased, with funding from the Mansion House Hotel, two artificial-snow machines.

“On Friday and Saturday through Christmas, from 4 to 6 p.m. we’re going to have it snowing on Main street,” she said.

A large private party planned for President Obama’s 60th birthday on the Vineyard this weekend has been canceled amid...

Many people have heard of Iggy’s Bakery if you’re from Boston or the surrounding area. There is an Iggy’s...