Dredging and intensive study are part of a new project for Chilmark Pond, as two foundations have joined forces to develop a science-driven restoration plan for the pond.

The project will begin with a dredging project to deepen pond coves and aid circulation, a practice that has proven successful in the Edgartown Great Pond in tandem with regular breaching to the sea.

Already under study by the Massachusetts Estuaries Project in recent years for nitrogen impairment, Chilmark Pond came back into the spotlight last summer when the presence of cyanobacteria turned up, sickening at least one person.

“Our ambition to restore the ecological health of Chilmark Pond has become even more urgent with the now regular occurrence of toxic cyanobacteria blooms,” Chilmark Pond Foundation president Allan Holt said in a press release announcing the partnership last week. “We know it will be a long-haul effort and we are committed to seeing it through so Chilmark Pond can once again support fish and shellfish and all our kids and future generations can play safely in its waters.”

Founded in 2018, the Chilmark foundation grew out of an association of riparian owners who had become involved in restoring the health of the brackish pond.

A 2014 report from the state estuaries project, which has been studying saltwater ponds and embayments throughout southeastern Massachusetts for decades, found Chilmark Pond was nearly at its limit for nitrogen carrying capacity. Formerly abundant eelgrass beds and the shellfish they support have disappeared.

The Edgartown Great Pond Foundation was formally established in 1998 with a focus on science-based conservation in the pond. (A more informal group had been involved in studying the pond since the 1980s.) Privately funded, today the foundation has an executive director and its own dredge and works in concert with the town shellfish department to monitor and maintain the pond.

“The Edgartown Great Pond is a great success story. Over the last 10 years they have basically restored the ecological health of the Edgartown Great Pond,” Mr. Holt told the Gazette by phone. “We thought it made a lot of sense for us to use the combined resources to do a project similar to what was done in Edgartown . . . under their leadership and guidance.”

The Chilmark foundation has applied for a dredging permit with the goal of improving water circulation when the pond is opened to the ocean.

The year-long permitting process was initiated during a hearing at a recent Chilmark conservation commission meeting. A second hearing is slated for next month, after which the foundation will file permit requests with the state, Mr. Holt said. 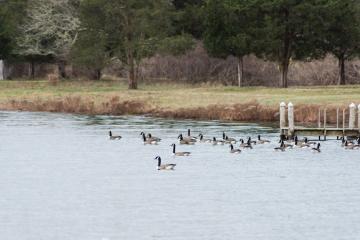 Long-term study will include dredging in coves.

Chilmark health agent Marina Lent said areas of the upper pond near Lucy Vincent beach have been closed to swimmers since 2012, when pollution from nearby birds caused the pond’s bacteria load to soar.

A recent series of hot, dry summers have only worsened the pond’s pollution, Ms. Lent said. This summer marked the third consecutive season that large blooms of toxic cyanobacteria — known as blue green algae — have surfaced in alarming concentrations.

“This neurotoxic stuff will make you sit up and take notice. It’s powerful stuff,” the health agent said, noting the host of health risks to humans, from skin irritation and gastrointestinal symptoms, to more serious neurological disorders.

This summer, the town closed the pond for recreational use after an adult man suffered serious complications following exposure to the algae while crabbing.

The recent partnership with Edgartown marks a new and more aggressive chapter in the restoration of Chilmark Pond.

It begins with the proposed dredging project, according Ms. Reddington.

“Without dredging you have a much different sort of impact of each opening,” she said, citing findings from dredging studies in the Edgartown Great Pond. “The duration of the openings can be shorter, but more importantly, the amount of tidal exchange the volume of water coming in and out is different following dredging. If each opening is more impactful, you get a better ecosystem.”

Longer term, Ms. Reddington said both foundations also plan to develop a 10-year restoration plan with a goal of lowering harmful nutrients in the ponds.

“One of our objectives is looking for nitrogen hot spots . . . and evaluating those putative hot spots based on the GIS data to see where restoration work could have the most impact,” Ms. Reddington said. “If you find areas that are really contributing more nutrients, there are new effective ways to counteract that maybe didn’t exist about 20 years ago.”

Ms. Reddington’s foundation will also lead a cyanobacteria monitoring program for both Chilmark and Edgartown beginning next year, she said.

As the two foundations embark on the project, Ms. Reddington stressed the importance of public awareness.

“Elevated nitrogen and phosphorus levels, rising temperatures, and other challenges associated with climate change are problems for which every pond on Martha’s Vineyard must prepare,” she said.