At the performing arts center, there would have been standing ovations. Instead, applause came in the form of blaring car horns for the Martha’s Vineyard Regional High School production of It’s a Wonderful Life: A Live Radio Play.

The production was recorded on Zoom and screened at the drive-in theatre last weekend. So many carloads of viewers signed up that the original two shows, on Friday and Saturday nights, quickly sold out and an afternoon matinée was added Saturday.

Each screening began with a recorded performance by the Minnesingers, the school’s elite choir, in their first public appearance of the school year. To make their concert film, the choir met the weekend before, under a large tent on the high school campus. Director Abigail Chandler and accompanist Nancy Rogers led the singers through a short program of holiday favorites from multiple traditions, including old English caroling and the blues.

Widely spaced beneath the white tent last Saturday, as a heavy rain fell outside, the Minnesingers made a striking appearance in their traditional black and white holiday attire, accented with red bow ties for the boys and long black cloaks for the girls. Ms. Chandler sported a bright red scarf and Ms. Rogers wore fingerless gloves to keep her hands warm at the keyboard.

Filmed and edited by Brian Ditchfield and Tom Ellis, with sound recorded and mixed by Martha’s Vineyard Performing Arts Center director Charlie Esposito, the Minnesingers concert was also an unexpectedly intimate listening experience. Sitting in the dark with car radios tuned to a dedicated frequency, the drive-in audience heard the choir in stereo and at close range.

Originally planned for a socially distanced live performance at the drive-in, the show was pre-recorded on Zoom during the musical theatre class that Ms. Chandler and Ms. Ditchfield teach jointly. The show starred more than 20 students, more than a few of them also Minnesingers, and several playing multiple roles. 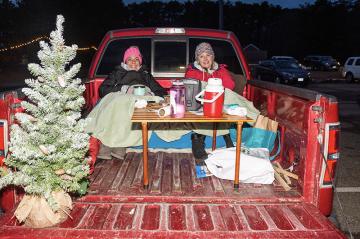 Audience was feeling the mood.

As bungling Uncle Billy, junior Ben Yancey deftly delivered an early pratfall that prefigured the character’s near-catastrophic misadventure later in the script, when he loses the deposit for the family business and sends George on a fateful rampage.

Clarence the wingless angel, who comes to George’s aid, was played with winsome sincerity by senior Sarah Lytle, with Ingrid Moore as her heavenly supervisor.

In the role of Henry Potter—“the richest and meanest man in all the county,” and the Baileys’ would-be nemesis—sophomore Jack Tully exuded menace, speaking in low and baleful tones reminiscent of Simpsons-heavy Mr. Burns.

Senior Summer Riordan was a convincing Violet Bick and Ms. Sykes a vulnerable Mr. Gower, the druggist in both of the story’s imagined Bedford Falls timelines: the one in which George Bailey and his ideals exist, and the one in which he was never born and the town has been renamed Potterville.

In the end, as in the film, George returned to his wonderful life, Clarence earned his angel’s wings and the Baileys celebrated Christmas in Bedford Falls. But there was another treat in store for the Vineyard audiences when the entire cast appeared on-screen at once, in separate Zoom windows, for the Minnesingers’ final song: Auld Lang Syne.

In 2020, the Covid-19 pandemic forced all six Island towns to delay their annual town meetings and elections in...

The Martha’s Vineyard Hospital announced that Island teachers and child care workers can sign up for vaccine appointments starting...

People are always wondering what there is to do year-round on Martha’s Vineyard. You may be surprised to find...

In past years, gnomes have been known to appear on the Polly Hill Arboretum grounds, and it has become...