It started like any other year for the Vineyard’s thriving arts scene, with a quiet, recuperative January followed by increasing bustle as a promising 2020 unfolded.

In February, the regional high school musical Big Fish delighted audiences at the Performing Arts Center, and Beach Road Weekend announced that the headliners for its second three-day concert festival at the end of July in Vineyard Haven’s Memorial Park, would be Beck and Norah Jones.

Featherstone Center for the Arts launched January 2020 with new exhibit.

Featherstone Center for the Arts opened its first group exhibition of the year, with more than 40 Island artists showing their work on the theme of numbers and numerals, while a lively art show by the Vineyard Independence Partnership, a group of Islanders with disabilities and their allies, brightened the walls of the Martha’s Vineyard Playhouse lobby café.

Early March brought the Chilmark Potluck Jam’s 51st gathering in its more than 10-year history at the town community center.

Then the coronavirus hammer came down, crushing plans large and small for what was shaping up to be another banner year for the arts on Island.

One of the first events to fall to the uncertainty and dread of the pandemic was the Martha’s Vineyard Film Festival’s three-day movie marathon in March. Cancellations mounted through the spring and early summer. Movie theatres and the museum closed, the Martha’s Vineyard Chamber Music Society called off its 50th-anniversary season, the Martha’s Vineyard Playhouse canceled its summer programming and a second Beach Road Weekend would also be pushed to the following year.

But even in those darkening first weeks of the pandemic, Vineyard artists of all stripes were not about to write off 2020. The months since March have revealed an Island scene that’s tenacious, collaborative and resilient, rewarding audiences with innovative new ways to engage with the arts online — and by midsummer, in person as well.

Within days of the potluck jam in Chilmark, musicians Sean McMahon and Siren Mayhew began performing online social distance-sing concerts from their home, Ms. Mayhew often singing with the couple’s small daughter in her arms as her husband played guitar and sang along. 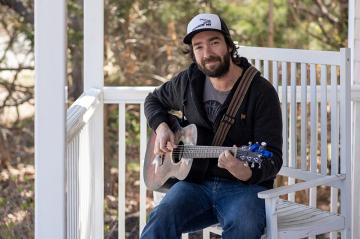 Any Herr moved his music classes online to zoom.

Island musicians gathered on Zoom to celebrate the life of singer-songwriter John Prine, of Chicago and Nashville, who died of complications from Covid-19 in early April. Andy Herr moved his Island Music open mic series to the internet and, under the auspices of Island libraries, taught bass, guitar and ukulele to aspiring Island players on Zoom.

“I wanted to be able to use all of the technology I have,” Mr. Herr told the Gazette in July.

Digital technology proved a lifeline for Ladyfest, which streamed a stripped-down show from the Martha’s Vineyard Museum in October to raise money for Connect to End Violence, a Martha’s Vineyard Community Services program.

On Screen and at the Drive-In

The film society later began showing first-run films at the film center in Vineyard Haven, with limited seating and mask-wearing is required. 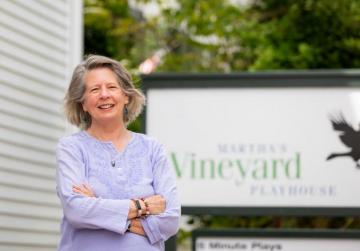 The Martha’s Vineyard Playhouse also pivoted online, first with a successful auction of work from the art show and then with an applause-worthy series of short plays performed and recorded on Zoom.

In early summer the film festival collaborated with the YMCA to develop a drive-in theatre behind the ice arena in Oak Bluffs. The festival celebrated its 20th anniversary with sold-out showings of new and classic films over the summer, and proved so popular it is continuing to program movies through the off-season.

Visual artists too hung in there, with many galleries posting their collections online, and new galleries opening over the summer, including the Ruel Gallery in Menemsha, and Winter Street Gallery and Untameable Gallery in Edgartown. 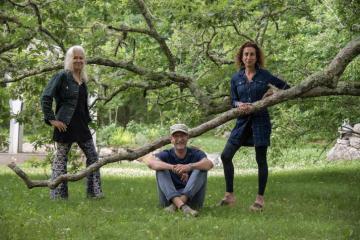 Kate Davis, David Heilbroner and Tamara Weiss collaborated on documentary Into the Gig.

In the Oak Bluffs arts district, Knowhere Gallery, which features women and artists of color, opened a second space downstairs and neighboring ART Gallery changed its name to Galaxy Gallery. Alison Shaw was open by appointment only, but other galleries on Dukes County avenue stayed open late for summer monthly arts strolls that took place without the usual food, drinks and live music of other years.

Literary events, from author talks and poetry readings to multi-day writing classes, translated well to individual screens. The Island’s much-loved Bunch of Grapes bookstore found its salvation on the internet, raising more than $50,000 over two days in April — and a total of more than $63,000 by Christmas — on the crowdfunding platform GoFundMe.

Perhaps the highest-profile page-to-screen transitions had nothing to do with the pandemic.

Seasonal Islanders Liz Garbus’s six-part HBO series I’ll be Gone in the Dark and Scott Frank’s The Queen’s Gambit, a seven-part Netflix series written at his Chilmark residence, both racked up viewers and raves.

Island filmmakers Kate Davis and David Heilbroner released their documentary Born Into the Gig, produced by Tamara Weiss, tracing the lives and careers of the children and grandchildren of famous musicians including James Taylor and Carly Simon, Bill Withers and Stephen Stills. It played on demand during the Filmusic Festival, the Woods Hole Film Festival and other virtual film fests in 2020.

Other movies with Vineyard connections released this year included Julie Taymor’s beguiling Gloria Steinem tribute The Glorias and the documentary On the Record, which spotlights Drew Dixon’s rise and fall as a high-powered music producer in the misogynistic world of hip-hop recording.

Performing artists faced tougher challenges, with the youngest taking the hardest hits. The Minnesingers, the regional high school’s elite choir, lost all their public performances, singing only at the socially-distanced graduation ceremony in July and in a masked, recorded mini-concert screened at the drive-in the weekend before Christmas.

Other groups such as church choirs, the Island Community Chorus and Roberta Kirn’s community sings were also brought to a standstill.

But theatre, dance and music events — and one live show that combined all three — emerged over the summer, fall and winter as Island arts groups joined forces to reach Island audiences. 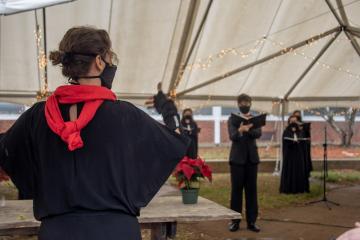 Much credit for the collaborations is due to Ms. Smith, now in her 11th year running Featherstone.

The Martha’s Vineyard Museum eventually welcomed performers to its outdoor grounds, from a socially distanced chamber music concert in August to a spooky dance, theatre and music extravaganza on Halloween, a collaboration between Built on Stilts, the Yard and the museum.

In October, Kate Taylor leaned into the pandemic’s drop in employment for professional musicians to record a new album, flying to Los Angeles during a Covid-19 lull early in the month. There she reunited in the studio with her first producer, Peter Asher, and several of the musicians who played on her Sister Kate debut 50 years ago.

The Minnesingers got back to work as well. The group’s recorded Christmas concert was screened at the drive-in, and broadcast on WMVY, to open the school theatre department’s production of It’s a Wonderful Life: A Live Radio Play. A spring concert is also planned.

It was a year that saw the deeply felt losses of several Islanders in the arts.

Lee Fierro, who left an indelible mark on the moviegoing consciousness with her police-chief-slapping turn as Mrs. Kintner in the original Jaws directed by Stephen Spielberg, was also a founder of the Island Theatre Workshop who cultivated generations of young performers through youth theatre classes and productions. She died at 91 in April, of complications of Covid-19 in an assisted living facility near her family in Ohio. 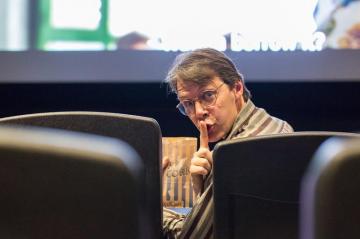 Island painter Ovid Osborn Ward, a descendant of Edgartown whalers, was known for his paintings of Vineyard boats and the Whale’s Tail sculpture next to the Old Sculpin Gallery on Dock street. Earlier in his career he also designed boats and automobiles. Mr. Ward died at the Martha’s Vineyard Hospital in June at 75 after years of treatment for lung cancer.

Bob Dutton, 58, who died at home in August from aggressive brain cancer, was an actor and theatre teacher from an Island family who founded Island Entertainment, the long-beloved and now closed movie rental shop in Vineyard Haven. He was married to Molly Conole and taught drama at the high school before becoming manager of the Martha’s Vineyard Film Center.Mr. Dutton’s unfinished musical, The Ivory Door, was presented online by a group of performer friends the day after he died; he was able to watch the final rehearsal.

Finally, movie buffs were saddened to learn that the historic Capawock and Strand movie houses — lovingly restored with community donations five years ago — would permanently close.

But as 2020 has proved, almost anything is possible when artists are determined to make it happen. As high school senior and Minnesinger Margaret Sykes told the drive-in audience on Dec. 19: “The arts — they always find a way.”

Home page picture by Jeanna Shepard: Ann Smith at Featherstone Center for the Arts has hope for a new year.