The Sunday snowstorm on the Island led to a bevy of minor traffic accidents, downed trees and scattered power outages, but no major incidents, police and other public safety officials said Monday.

Ocean Park gingerbread gets some frosting.

The storm began with rain early Sunday and quickly transitioned to wet, heavy snowfall as temperatures dropped by mid-day. The system ultimately dumped a little over four inches of snow, blanketing the Island in a sea of white just in time for Tom Brady’s 7th Super Bowl victory.

Chilmark police chief Jonathan Klaren said the vehicle involved in the skidding incident slid off of Middle Road just past Tea Lane. No one was hurt in the crash; the vehicle sustained minor damage.

The downed trees occurred on Meeting House Road at the intersection of South Ridge Lane and on State road just past the police station. Chief Klaren also said one of the two reports of branches leaning on power lines lead to a temporary power outage.

In Tisbury, Sgt. Max Sherman reported a minor accident on Norton Lane off of Main street Vineyard Haven when a car collided with a street sign. No one was injured.

“They were turning from Main Street down to Norton and they slid into the sign a little bit. It didn’t appear to do too much damage, just dislodged the sign a bit,” Sergeant Sherman said.

Edgartown police reported a fender bender in the Your Market parking lot with no injuries. Lieut. Chris Dolby said a vehicle skidded into the rear end of another car that had stopped to let someone out of a parking space. 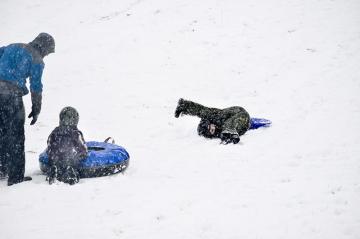 “It was a very minor collision,” Lieutenant Dolby said.

No incidents were reported in Oak Bluffs and Aquinnah.

Before darkness fell, Islanders were out sledding on hillsides and enjoying walks in the first real snowfall of winter.

By Monday afternoon, bright sunshine led to some snow melt in downtown Edgartown, but temperatures stayed in the 20s.

More snow was in the forecast for Tuesday.