The Vineyarders played almost entirely on the Cape last week as they looked to build momentum heading into the final days of the high school winter sports season.

The boys hockey team kicked off last week’s action with an onslaught of offense Monday against Dennis-Yarmouth at the Tony Kent Arena in South Yarmouth. The Vineyarders scored eight unanswered goals after falling behind 1-0 in the first period to come away with an 8-1 victory. Hunter Meader notched a Texas hat trick with four goals and Nick BenDavid earned his first varsity hat trick in the win. Jake Scott also put the puck in the net for the Vineyard.

On Friday at the Gallo Ice Arena in Bourne, the boys couldn’t match their previous offensive output and fell to Sandwich 3-1. Pete Gillis scored the Vineyard’s only goal with an assist from Meader.

Saturday the Vineyarders were back home for a showdown against Monomoy and their offense clicked once again. The Vineyard beat the Sharks 5-1 and five different Vineyarders scored goals. Eli Gunderson, Cam Geary, BenDavid, Meader and Scott all contributed goals in the winning effort.

In girls hockey, two late goals from freshman Marin Gillis against the Cape Cod Furies Wednesday forced a 2-2 draw at the Charles Moore Arena in Orleans. After falling behind 2-0 in the second period, Alana Nevin assisted Gillis to put the Vineyard on the board and then Paige Anderson found Gillis again to tie the game in the third.

“That was a great game,” said girls hockey assistant coach Nell Coogan. “We had some great goaltending and (Gillis) had two beautiful goals.”

On Saturday against Barnstable, Coach Coogan said the girls started strong but the Red Raiders’ goalie corralled everything the Vineyarders threw at her. In the end, the girls lost by a 5-1 margin. 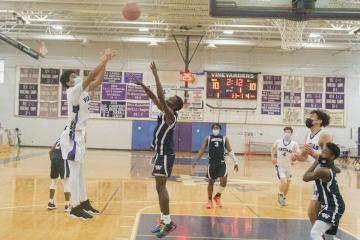 The boys basketball team split their games this week. They lost 54-37 against Nauset in North Eastham on Wednesday and then bounced back with a 51-32 win against Barnstable on the Cape on Friday. Against the Red Raiders, Mike Trusty led the way for the Vineyard with 13 points and Aiden Rogers scored 11 in the Vineyarder’s sixth win of the season.

“We shut them out in the first quarter,” said Vineyard head coach Mike Joyce. “Defensively we’ve been playing really hard and really well. We just got to keep it up.”

The girls basketball team faced some of the toughest competition in the Cape and Islands league last week. The young Vineyarder squad and their senior captain Kylie Estrella gave Nauset, Barnstable and Falmouth their all but it wasn’t enough as they were on the losing end in all three matchups.

Against Nauset Wednesday, Estrella scored 20 points but the girls came up short 45-38. Estrella had another 12 points the next day against Barnstable but the Vineyarders fell 60-32. On Saturday in Falmouth, the Clippers put the clamps on the Vineyarders defensively and won 43-15.

The boys swim team captured their fourth win of the season against Barnstable last week 61-59 as several Vineyard swimmers set personal bests and swam qualifying times for states. In the 200-meter freestyle, Ruairi Mullin took gold with a state-qualifying time of 1:56.22. In the 50-meter free the Vineyarders went one-two-three with Nathan Cuthbert, Christian Flanders and Emmett Silva finishing in that order. Flanders also set a new personal best in the 100-meter backstroke and won first place with a time of 1:05.67.

While the girls team came up short against Barnstable 111-39, there were still some bright spots. Gabby Carr won the 500-meter freestyle with a sectionals qualifying time of 5:49.07 and Lily Jones set a new personal best in the 100-meter freestyle finishing in 1:03.25, good for second place in the event. The girls 400-meter relay team of Olympia Hall, Eleanor Hyland, Jones and Carr finished second with a time of 4:29.94.