The state Department of Conservation and Recreation plans to immediately close some 25 miles of unpermitted trails that were carved into the Manuel F. Correllus State Forest, and has initiated a comprehensive, five-year restoration plan after citing the Sheriff’s Meadow Foundation for the unauthorized clearing last summer.

Announced during a lengthy public information session hosted by DCR staff Thursday night, the mitigation plan caps a nearly year-long investigation and review process by DCR into the trail clearing. It also marked the first detailed accounting of the sweeping extent and impact of the clearing that took place in priority forest habitat.

According to state wildlife experts with DCR and new maps showing the unpermitted trails, the trails snake through nearly every corner of the 5,000-acre state forest, disturbing at least 32 acres of rare species habitat, in conflict with DCR’s mission to maintain the natural, biological diversity of the state forest.

“This expanded system of trails causes additional stress to rare species . . . so we take this very seriously. This fragments the forest in a way that we would not have preferred. And it conflicts with our trail density guidelines,” Mr. Seaborn said. “As a result, our determination is that these unauthorized trails will be closed, and we will be working to restore them.”

In the nearly two-hour meeting, DCR officials confirmed that Sheriff’s Meadow Foundation, which works with the state as a third party forest manager, was responsible for the clearing, but said no civil or criminal penalties would be issued for violations of the Massachusetts Endangered Species Act. 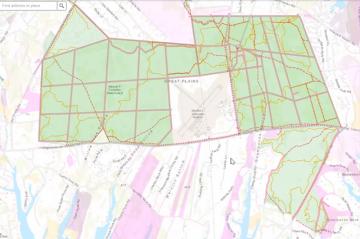 “We’re not envisioning penalties being a part of the return to compliance plan at this time,” said Jesse Lettick, chief of regulatory compliance at MassWildlife’s Natural Heritage Program.

There was little explanation about why or when the unpermitted trail clearing originally took place, although a timeline presented by DCR said the clearing came to the state’s attention in April 2020. A citation was issued to Sheriff’s Meadow by the Natural Heritage and Endangered Species Program last June, and the state subsequently worked with the land trust to develop a restoration plan. The state conducted site visits between October and December of 2020.

Sheriff’s Meadow executive director Adam Moore confirmed last year that a board member, Michael Berwind, was involved in the trail clearing for mountain biking, and that Mr. Berwind was no longer on the board.

“Over the years, we worked cooperatively, in close communication and in good faith, on a volunteer basis with DCR at the local level on trail work in the forest,” Mr. Moore wrote. “If we had known that the trail work did not have the proper NHESP permit or follow the proper DCR procedure, we would not have undertaken the work.”

“We are working very hard with Natural Heritage and DCR to reach an agreement, complete mitigation and any restoration, and return to compliance,” he added.

Sheriff’s Meadow will pay for the restoration plan, state officials also said Thursday, as part of the citation from Natural Heritage, which acts as the compliance authority for state forest and trail management. No monetary figure was provided.

“The bulk of the cost is actually going to be borne by the Sheriff’s Meadow Foundation as part of their non-compliance,” Mr. Seaborn said.

The 5,000-acre forest that sits atop the Island’s sole source aquifer is one of the top three forests in the state when it comes to biodiversity, DCR officials said — home to everything from rare buck moths, migrating warblers, the Eastern whippoorwill and unique ecological features known as frost pockets. 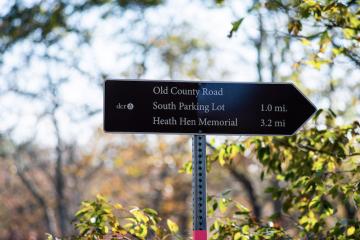 State forest covers 5,000 aces in the center of the Island, including priority habitat and sole source aquifer protection.

DCR officials said Thursday that the unauthorized clearing increased trail coverage in the state forest by 35 per cent, from 72 miles to 97, raising trail density from moderate to high, while the stated goal is to keep the density low. The majority of the pre-existing trails are fire trails, they said.

Mr. Seaborn said the state used the unpermitted trails as an opportunity to take a fresh look at its entire, holistic management of the state forest, essentially reviewing the trail network retroactively.

As part of that broader review, DCR determined that there were also approximately three miles of authorized trails that were underused, redundant, or poorly sited that would be closed down as well. State officials said they would retain about four miles of unpermitted trails that promoted the goals of increasing connectivity throughout the state forest.

The state plans to close parts of the red path in the south part of the forest west of the airport, and the purple path just north of it. Parts of the unpermitted trails named Twisty and Fantasy will remain.

“A group of us . . . went out and started doing some ground-truthing,” said DCR ecologist Alexandra Echaldi. “From all of that analysis, we determined that certain DCR trails that were poorly sited . . . or went through some significant habitat, could be removed from the trail map and also restored to pre-existing conditions.”

On Thursday DCR officials pointed to the hire as a first step in ensuring that forest is closely monitored. In addition to the full-time superintendent, two summer staffers have been hired, and the state will retain forest firefighter Karen Lothrop, who has been commuting part-time from the Cape.

Susan Kane, DCR south regional director, said the agency is committed to supporting Mr. Laffey in management of the forest.

“Although he is alone out there right now . . . it’s my commitment to support him in a much bigger way than maybe this position was supported in the past,” she said.

Concerned residents peppered officials with questions, from fire safety to how the state plans to use a vacant house on state forest property. A handful of people pushed back against the decision to close the trails, but the vast majority of public comment centered on forest management, how 25 miles of trails could have been cleared without the agency’s knowledge, and what could be done to prevent it in the future.

DCR officials said they regretted the clearing and announced a five-year monitoring program with Sheriff’s Meadow to restore the trails.

The long-term impacts of the trail clearing remained unknown.

“There were definitely immediate impacts,” Mr. Seaborn said. “Long-term . . . we will be monitoring that very question.”

The meeting and restoration plan will be available for viewing and public comment on the state website.

2 'immersive' van Gogh exhibits are coming to Boston. Here's why.