Strapped to the bed of a flatbed Ford in an 800-gallon tank, hundreds of rainbow trout crossed the Vineyard Sound and splashed down into Island ponds this week.

It has been just over a year since MassWildlife stocked Vineyard ponds. The last one took place on March 12, 2020. After that, stocking efforts were limited because of the pandemic and the Vineyard missed out.

But on Wednesday stocking resumed as John Garofoli and Connor Fleming from the Massachusetts Division of Fisheries and Wildlife transported the trout from the state hatchery in Sandwich. The first stop was Duarte’s Pond.

Mr. Fleming carefully backed the truck between trees and fence posts, then the men methodically scooped out the trout and gently tossed them into the pond.

One eager angler watched from nearby, a fly rod in hand.

The trout truck then traveled down Lambert’s Cove Road to Seth’s Pond where the fish darted into the muddy abyss as soon as they hit the water. The last stops of the day were Old Mill Pond and the Upper Lagoon. In all 765 trout were released into Vineyard waters.

Trout stocking in Massachusetts dates back to one of the commonwealth’s first fish commissioners, Theodore Lyman III, who established the program in 1866 after serving under Major Gen. George Meade in the Civil War. Today, five hatcheries supply Massachusetts ponds and streams with four different types of trout.

Steve Hurley, the southeast district fisheries manager for MassWildlife, said the trout are raised in raceways at the hatcheries where they dine on feed pellets until they’re about a year and a half to two years old. In addition to rainbow trout, the state raises brook trout, brown trout and tiger trout.

“Most of our trout streams were depleted by the building of dams and that’s kind of what reduced our trout fishing resource,” Mr. Hurley said. “There’s always been a demand for trout fishing in Massachusetts, even as their habitat declined, so now we’re reliant on the hatcheries to supply the demand.” 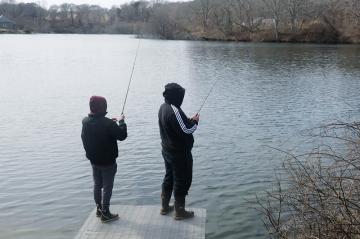 Two anglers are ready to reap the benefits on the Lagoon.

Proceeds from fishing and sporting licenses are the sole income source for the trout program in Massachusetts. A fishing license is required of all persons 15 years and older. This year, the southeast district allocated 81,867 trout for stocking.

“They’ll acclimate to the water and get used to eating things other than the pellets,” Mr. Garofoli said. “Generally the stocking season is in the fall and the spring because the water temperatures at the fish hatchery are right around the same as in the ponds and streams.”

Mr. Fleming said they will return in about a month with more fish.