In all, the Gazette won 19 first place honors in various categories, including reporting, photography and design. In addition to his overall award for reporting, Mr. Asimow earned nine prizes, including three first place awards for coverage of Ernie Boch’s plans for a park, a story about Vineyard Haven’s working waterfront and an interview with Drs. Sally and Bennett Shaywitz. He also won three second place awards and three third place awards.

The annual conference and awards ceremony usually takes place each February in Boston but this year was moved online and held Thursday and Friday of this week. The contest includes weekly and daily newspapers in various circulation categories throughout New England. The Gazette competes in a category for weekly newspapers. 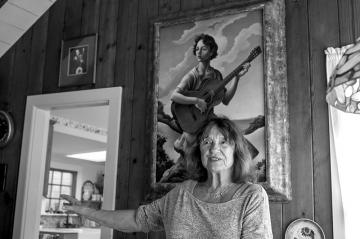 First place awards were given to three of the Gazette’s contributing photographers: Ray Ewing for a photograph from a summer peace vigil, Jeanna Shepard for a portrait of Jessie Benton and Tim Johnson for an image of a dog in a boat. Ms. Shepard and Mr. Ewing also won second and third place awards, respectively. Gazette staff photographer Mark Lovewell took home a second place award and two third place awards.

Steve Durkee, director of graphics and design, won first place for his design of an arts and entertainment section.

The special award for best coronavirus coverage was given to the staff.

A gallery of all the award-winning photography appears here.