According to the unofficial vote tally, Ms. Green-Beach was far and away the top vote-getter, receiving 555 votes. Mr. Balboni received 406, and Mr. Michelson received 259. The top two vote getters were elected.

Incumbent Jason Balboni is elected to a second term.

Total turnout was 714 ballots cast, according to town clerk Colleen Morris, who read the results with an excited Ms. Green-Beach in the background, a short time after the polls closed at 7 p.m.

“I’m thrilled,” Ms. Green-Beach said after the unofficial results had been tallied. “It’s been incredible. I’m inspired by the outpouring of support . . . so much more so than I expected.”

A seat on the five-person board opened up when longtime selectman Greg Coogan announced that he would not seek re-election earlier this spring. Ms. Green-Beach and Mr. Michelson then entered the race to face off against one-term incumbent Mr. Balboni.

The executive director of the Martha’s Vineyard Shellfish Group, Ms. Green-Beach, who is 37, grew up on the Island and attended the regional high school before leaving for college. She is married with step-children and a four-year-old.

Ms. Green-Beach had no political experience before her decision to run for selectman, telling the Gazette in an interviewthat she had long wanted to take on a larger role in the community that she had always called home.

Mr. Balboni, 49, is a businessman who was chairman of the town’s finance committee before he won his first term as a selectman three years ago.

Mr. Michelson, 69, is a retired EMT who has previously served on the Martha’s Vineyard Airport Commission. 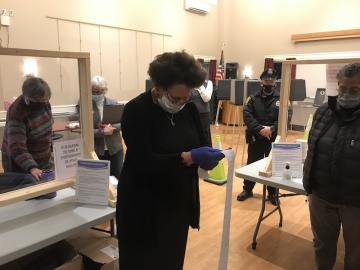 All three candidates campaigned gingerly, cognizant of the pandemic, replacing the usual meet-and-greets and door-knocking with mailers or Facebook groups. Yard signs — including Ms. Green Beach’s handwritten ones — speckled the town.

But all three were at the town library on election day Thursday, greeting a steady stream of voters as they filed into the parking lot. Ultimately, it was Ms. Green-Beach and Mr. Balboni who won the day — just as rain started to come down at the end of it.

“I’m excited to just do my best, and learn from the other members of the board,” Ms. Green-Beach said. “It was a pleasure running and learning with both the other candidates.”

“Onward through the fog,” she added.

Mr. Balboni, who was also present for the vote reading, thanked the townspeople for re-electing him to a second term.

“I just want to thank the voters of Oak Bluffs for giving me the opportunity to serve for another three years,” he said. “Now time to get working.”

After the votes were read, Mr Coogan, who had served six terms on the board, shook Ms. Green-Beach’s hand and offered her his hearty congratulations, as well as some hard-earned wisdom.

“Remember, you’ll never get as many votes as you get the first time,” he said with a laugh.

Full results will be available with the official vote count.

In West Tisbury, an annual town election with no contests saw an extremely light turnout of just over 3.6 per cent of registered voters. Jeffrey (Skipper) Manter 3rd was re-elected selectman with 97 votes.

In a second unusual year due to the pandemic, annual town meetings and special elections are scheduled for later in May and June, when voters in Island towns will take up the bulk of business, including Proposition 2 1/2 overrides.