As the Vineyard Gazette turns 175 this year, the Vine takes a look back at the remarkable ways Island life has endured through change and the passage of time. We begin with the story of one notable cottage that has offered an inclusive welcome in Oak Bluffs since it opened in 1880.

In the circle of life, nature typically gives and takes. Often what is lost is gone forever, replaced by something shiny and new. But on the Island, thanks to our historic districts, we’ve found a way to keep the circle going by preserving otherwise temporary structures to tell the unique stories of our past.

In Oak Bluffs, Dunmere-by-the-Sea (né the Dunmere Cottage) has endured the test of time in the best possible way, shepherded from decade to decade by responsible owners. The story begins at 149 Circuit avenue in 1880 (when Oak Bluffs was still Cottage City) and continues today at 7 Pennacook avenue, where the cottage was moved in 1910. The three-story mansard-roofed Dunmere Cottage was built on the Circuit avenue site (where Tangerine and The Lazy Frog are now) by Hamilton J. and Katherine Greene to be a boarding house. 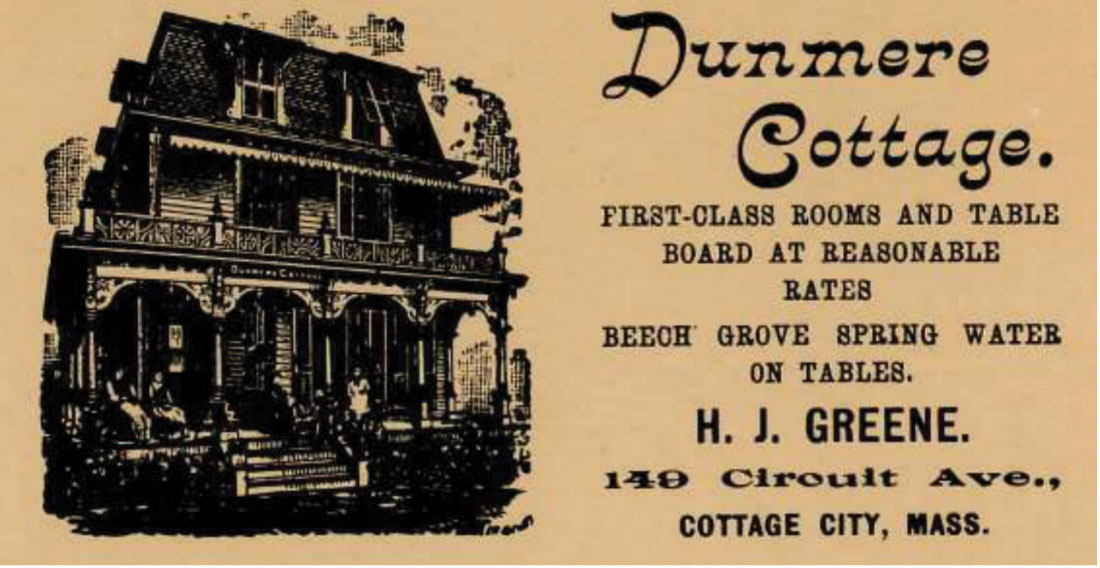 When the building was lifted and moved in its entirety to Pennacook, a new foundation was added, raising up the building and allowing a partly aboveground basement with windows. Fortunately, all the charming Victorian details of the “wedding cake” design stayed firmly in place through the move and over the years following. The new location was only a stone’s throw from the Inkwell.

Before the move, Oak Bluffs Land and Wharf Company president Erastus P. Carpenter had sold the land on Pennacook to one R. Flanders for $125 on September 20, 1871. It was Flanders who sold the land to the Greene family. In later years, the building changed hands almost a dozen more times. Perhaps one of the more notable owners was Joseph A. Sylvia – of Joseph Sylvia State Beach fame – who owned the establishment from 1925 to 1946. 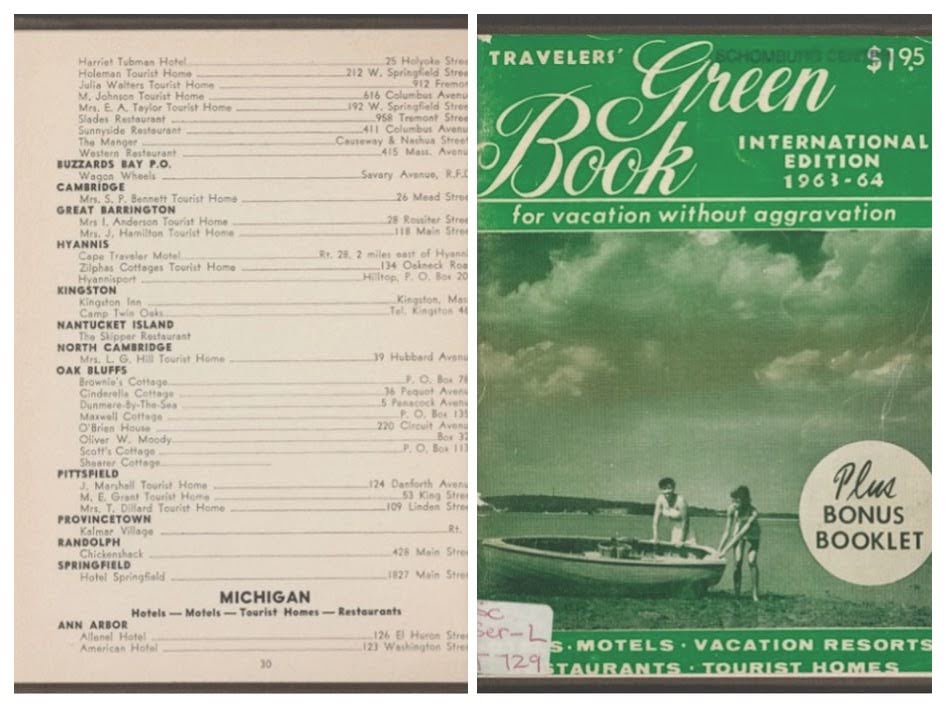 A poignant part of the Dunmere Cottage history was its listing in the (coincidentally named) Green Book . Published for more than 30 years starting in 1936, this was the travel guide (also called The Negro Motorist Green Book and later the Travelers’ Green Book ) that provided marginalized Black people with advice on safe places to eat and sleep when they traveled through the United States. The 1963-64 edition of the Green Book listed eight establishments in Oak Bluffs where rentals were acceptable, one of which was Dunmere-by-the-Sea. In the 1960s the cottage was also advertised in Ebony magazine.

In 1970, the Dunmere was converted to four apartments, one on each of the four floors. Operated continuously as a hotel/guest house (most recently by the Haney family from 1977 to 2020), the Dunmere became a second home for several Vineyard families who rented summer after summer for decades, among them Dennis and Maureen Jackson, Janice Benson and husband Barry Mizock, and sisters Doris Pinn and Eleanor Hughes. They all became friends at the Dunmere, sharing views of the beach and fireworks, food, libations and a camaraderie typical of Oak Bluffs and its history of inclusion.

Adding a ‘way cool!’ element to the story is an unconfirmed rumor shared by one of the guests that Led Zeppelin lead guitarist Jimmy Page once stayed at the Dunmere overnight with a paramour.

In late 2020, Kahina Van Dyke acquired the Dunmere with an eye to the future. No strangers to Victorian houses – or Oak Bluffs – Kahina and her husband, Claudio Casarotti, purchased the Narragansett House in 2018, another historic guest house built in 1880, which they are now operating as a bed and breakfast. It was their intention, Kahina said, to help “preserve the special character of the neighborhood and to welcome people to a place that can strengthen, connect and restore.” They have the same intention for the Dunmere. 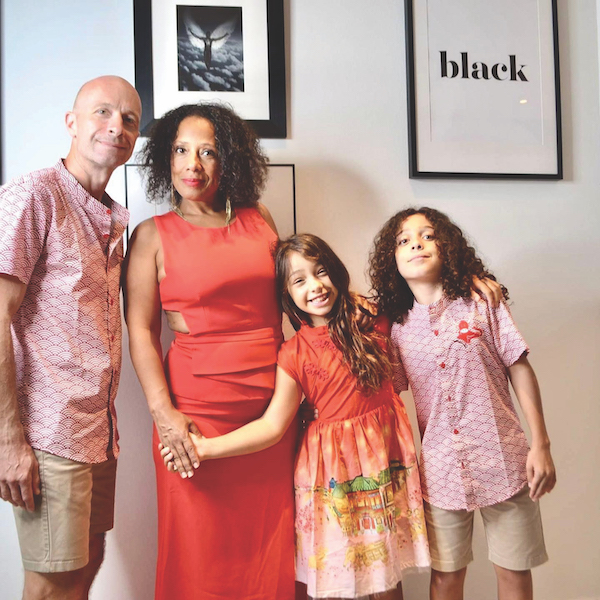 Kahina and Claudio also have a Victorian home in town – the town that Kahina fell in love with as a child, visiting every summer with her dad and staying at the Wesley House Hotel (now Summercamp). As an adult, Kahina was determined to find a place on the Vineyard, despite a career that takes her all over the world. She has lived and worked in cities from London to Dubai and was based on the west coast until last year when she became the chief digital and data officer for Standard Chartered bank – a global bank with headquarters in Shanghai, where the family now lives off season. But she hopes to spend every summer on the Island, giving her twin children memories of the Inkwell (a short walk from their home near the Dunmere) and of summer in Oak Bluffs.

She is wasting no time in readying the Dunmere to open for weekly rentals this summer, which will begin on June 19. In an April Facebook announcement, Kahina wrote, “My mission is to honor and preserve this property and this community by creating a place that all feel welcome to gather, connect and restore. A place of kindness. A place of inspiration. A haven.”

The Green Book predicted, “There will be a day some time in the near future when this guide will not have to be published. That is when we as a race will have equal opportunities and privileges in the United States. It will be a great day for us to suspend this publication for then we can go wherever we please, and without embarrassment.”

Dunmere-by-the-Sea’s history exemplified that prediction – and now new owners will extend the circle of its life.

Skip Finley lives in Oak Bluffs and is the author of Whaling Captains of Color: American’s First Meritocracy.