The Vineyard boys and girls tennis teams continued to roll in week two of the high school spring sports season as both squads defeated Nantucket Saturday to remain undefeated.

Earlier in the week, the girls defeated Nauset 3-0 in their home opener Wednesday and then downed Dennis-Yarmouth 5-0 Friday on the Cape.

“We’ve got a young team but they’re doing well, we got off to a good start,” said girls tennis head coach Bill Regali.

For the boys tennis team, the Vineyard swept all three of their opponents 5-0 this week starting with Nauset in North Eastham on Wednesday and then against Dennis-Yarmouth at home Friday before traveling to Nantucket Saturday to close out the week.

Unified track team had a game against the JV baseball team last week.

Ashley Brasefield smacked a grand slam in her first plate appearance and added two more RBIs on the day as the Vineyarders beat St. John Paul II 16-5 on Wednesday in Hyannis. Emma Williamson also homered for the Vineyarders as part of her three RBI day as Izzy Blake and Bethany Cardoza were also hot at the plate with three hits each. Genevieve Hyland struck out seven and earned the win for the Vineyard.

Later in the week, the girls lost to Sturgis and Nantucket in back-to-back home games Friday and Saturday. Sturgis blanked the Vineyard 21-0 and Nantucket triumphed by a 16-2 margin.

For the baseball team, the boys won their first game in dramatic fashion scoring three runs in the bottom of the seventh inning to beat Dennis-Yarmouth 6-5 Friday at home. Finn Lewis had three hits in the leadoff spot for the Vineyard and Cam Napior struck out 10 Dolphins over seven innings to earn the win for purple and white. 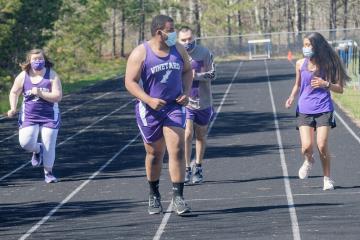 Unified track team will compete against other Vineyard teams throughout the season.

On Saturday, the boys carried their momentum to Nantucket and exploded for 11 first-inning runs en route to a 17-2 victory over the Whalers. Isaac Richards was stellar on both the mound and at the plate for the Vineyard. In his first start of the season, Richards struck out 10 Whalers over five innings and earned the win. At the plate, Richards also had two hits and four RBIs. Nico Arroyo and Leo Neville also produced productive outings with three and two hits each and two RBI for Arroyo and three RBI for Neville.

On the water, the sailing team also enjoyed two victories this week. On Tuesday, at the Hyannis Yacht Club, the Vineyarders beat St. John Paul II 3-1 and on Friday, back home in Oak Bluffs, purple and white swept Barnstable 3-0 to move to 2-0-1 on the season.

Back on land, the boys and girls lacrosse teams were mainly on the road last week and faced tough competition. The boys started the week with a 15-6 victory over Monomoy in Harwich on Monday before falling to Barnstable 7-6 in overtime at home on Thursday then 8-5 to the Whalers Saturday on Nantucket.

The girls lacrosse team opened their season Monday away against St. John Paull II. The Vineyard lost 13-3 with Savannah Meader, Maggie Best and Nellie Long scoring for the Vineyard. On Thursday, the girls were away again against Barnstable and lost 17-1. In the Vineyarders’ home opener Saturday, they took on Nantucket but fell to the Whalers 15-5.

In other track action this week, the unified track team ran in their first meet of the season against the JV baseball team on a sunny and warm Thursday afternoon. Unified head coach Ryan Kent said there was no shortage of smiles behind masks on the track as the Vineyarders competed in the long jump, shot put, javelin, 400 meter, 200 meter and the 4×100 meter relay.

“The meet was fantastic, both teams were playing together, everybody had a good time. I haven’t seen or heard so much laughter coming from a group of people all year long,” Mr. Kent said.

Also this week, three Vineyard football players signed letters of intention to play college football next year at their respective universities. Vineyard quarterback and offensive captain Zach Smith will continue to be a signal-caller at Hamilton College while defensive captains Brian Torres and Braden Sayles will play at Anna Maria and Bryant University. Torres played on both sides of the line of scrimmage for the Vineyarders and Sayles anchored the back end of purple’s defense at safety.