Edgartown voters easily approved a $3 million project to overhaul Memorial Wharf and agreed to move forward with a controversial project to install electric VTA bus chargers on Church street — all after electing a temporary moderator and struggling to make a quorum at a windy annual town meeting Saturday.

Steve Ewing, the town poet laureate, was elected moderator for the day.

Held under two massive tents at the Edgartown School for the second year, the long-planned meeting faced a variety of challenges, including the ongoing pandemic and the death of moderator Sean Murphy earlier this spring.

But the most pressing issue came at the start when the meeting was 25 voters short of a 210-voter quorum. Town officials quickly scrambled to round up more voters, and by 1:30 p.m. — half an hour after the scheduled start time, the meeting could legally begin.

Selectman Arthur Smadbeck began the meeting by calling for a moment of silence for former town administrator Peter Bettencourt and moderator Sean Murphy, who both died earlier this spring. Mr. Smadbeck called them “great citizens of Edgartown.”

The meeting was then turned over to town clerk Karen Medeiros, who called for nominations from the floor for a moderator. Chris Scott nominated Steve Ewing, and Lucy Morrison nominated Juliet Mulinare. After a vote, Mr. Ewing prevailed 146 to 43. 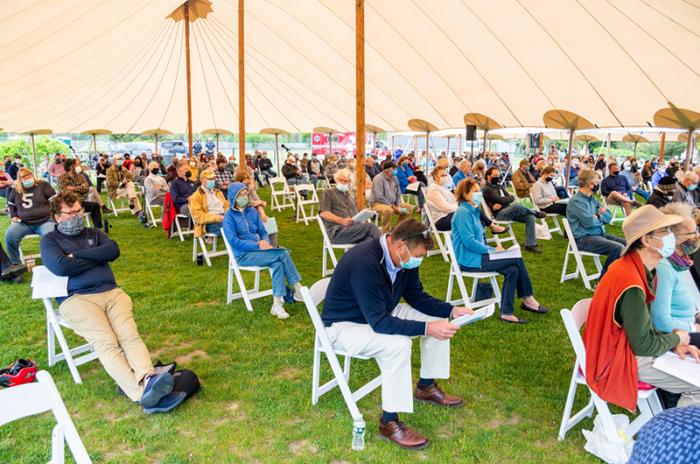 Voters gathered beneath tents for the second straight year due to the pandemic.

“Thank you everybody, whether you voted for me or not,” he said as he took the podium.

After a speedy four-article special town meeting wrapped up, including changing the name of the board of selectmen to select board, Mr. Ewing, who also serves as the town poet laureate, recited verse in honor of Mr. Murphy, who was elected moderator in 2019, taking over for longtime moderator Jeff Norton, who retired.

“Sean, he stepped into big shoes and filled them well/he walked in them until they filled his feet . . . As he slipped on, these big old shoes/he made them new again,” he recited.

Mr. Ewing then slipped into new shoes of his own, guiding voters through the first 60 warrant articles with little fuss. A $40.6 million operating budget, as well as hundreds of thousands of dollars for various capital projects.

A $2.85 million spending article for the Memorial Wharf project — which has also received a $1 million state grant — was approved. Voters also approved $100,000 for a town master plan, $200,000 for elevator updates, $50,000 for upgrades at South Beach, $26,000 for vehicle chargers at the town park and ride, $310,000 for a new ambulance and a variety of spending articles connected to the regional high school and Island social services.

Mr. Ewing delicately shepherded the meeting with his own humorous touches, asking voters how they felt about “the gravestones” or the “porta-potties” when arcane discussions about cemetery or beach maintenance arose. 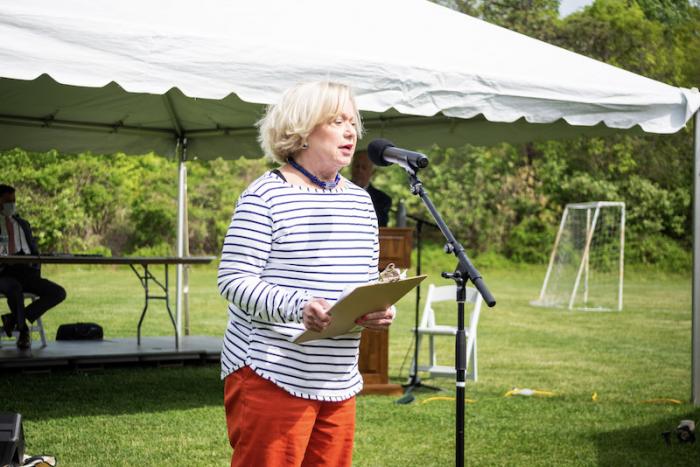 But the meeting bogged down when it came time to vote on a $1.2 million project to beautify the VTA bus station on Church street and add electric bus chargers. The issue had been postponed last year in favor of further study by a specially-appointed committee, which ultimately recommended approval of the project.

Two vocal Main street residents, both of whom had resigned from the study committee, spoke at length against the project. Jane Chittick said the chargers were unnecessary and threatened the character of the Edgartown historic district. Sara Piazza read an emotional statement describing the large number of buses that travel through downtown Edgartown.

“This is a con game,” Ms. Piazza said. “These buses are out of character for Edgartown. And yes, character counts.”

On the other side, the project saw substantial support. Bus drivers, planners and the town representative on the VTA advisory board, Mark Snider, all spoke in favor of the proposal, saying that it had been thoroughly vetted, came at no cost to the town, would allow the VTA to electrify its fleet and would lead to quieter, less obtrusive buses than the current diesel fleet.

“The induction chargers . . . will make the town quieter and cleaner, and improve the look and function of Church street and the visitor center . . . and the air we breathe,” Mr. Snider said in part. “Vote yes on this important project.” 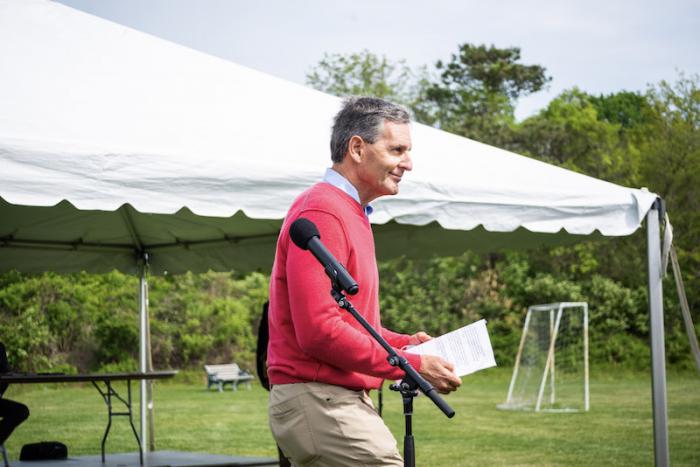 But Mark Snider, the town representative on the VTA advisory board, urged voters to approve the Church street improvements.

After continued discussion, Mr. Ewing called the question. The article was overwhelmingly approved.

Voters also agreed to change the town tax collector position from elected to appointed, and adopted a stretch energy code that will allow the town to apply for Green Community state grant funding.

Joining an Islandwide initiative, voters also adopted a non-binding resolution to reduce fossil fuel use by 50 per cent in the next decade and make 50 per cent of electric energy use renewable by 2030.

The meeting struggled to maintain a bare quorum, and at one point a second count was held.

But there were still enough voters present to approve a series of zoning changes, including one that will allow senior residential living facilities to be built in town. The zoning change will allow the hospital to move forward on a plan to buy land off the Edgartown-Vineyard Haven Road for a new nursing home.

The 81-article warrant wrapped up in under four hours. And, to the delight of all present, $10,000 was approved to hold a picnic in celebration of the town’s 350th birthday.

“Thank you all very much for coming on the 350th anniversary of this lovely little town we live in,” Mr. Ewing said.

10 things to do in Boston this weekend