In honor of Memorial Day weekend, the Chilmark, Edgartown and Tisbury schools held their annual march to the sea ceremonies on Friday. Last year Covid-19 prevented the schools from conducting the tradition in-person, but improving public health conditions this year allowed the event to return.

In Edgartown, the march took place in a modified capacity, with only seventh and eighth graders making the walk from the school to Memorial Wharf. Students Georgia and Mabel DeRoche opened the proceedings with a tribute to their grandfather, former Edgartown town administrator Peter Bettencourt, who died earlier this month.

Georgia and Mabel shared stories of their grandfather, noting that he played Taps at a much earlier Edgartown march to the sea ceremony, when he was 11 years old.

They said that despite their grandfather having never served in the military, they felt this event was a fitting place to honor him because of his decades of service to Edgartown.

“We will miss him as a loving family man,” the granddaughters said.

Current Edgartown town administrator Maj. James Hagerty of the United States Marine Corps spoke to the students about the story of his uncle, William T. Hagerty, a Tisbury native who died in combat in Vietnam in 1967.

“He was a 21-year-old Vineyard kid, just a couple of years older than you all,” he told the students. “Those are the types of sacrifices the people of the Island have made to make this place and this country, a land of opportunity.”

As per tradition, the seventh grade class recited Walt Whitman’s O Captain! My Captain! and the eighth graders delivered the Gettysburg Address. Then the students tossed flowers into the sea.

Tisbury School students gathered outside the school, around the flagpole.

Seventh grader Xeandre Miller was eager to participate in the poem recitation this year. “I get to say a poem in front of a crowd today which I have never done before,” Xeandre said.

He explained that his class had taken preparations seriously. “We practiced at recess, we practiced in the mornings before school, and we practiced after school. We would sit together and just say it over and over again.”

For eighth grader Jameson Whitmarsh, getting ready for the event meant not only memorizing the Gettysburg Address along with the rest of his classmates, but also working on his trumpet skills. Jameson, who has played Taps at the event since the fourth grade, said that since Covid stopped the school band from meeting this year, he felt a little nervous about being out of practice.

“Without band class, I haven’t been able to play in school at all. So I’ve had to practice just at home, which has been harder than practicing during the school day,” he said.

Despite his fears, Jameson’s practice at home paid off as he closed out the Edgartown ceremony with a moving rendition of Taps. 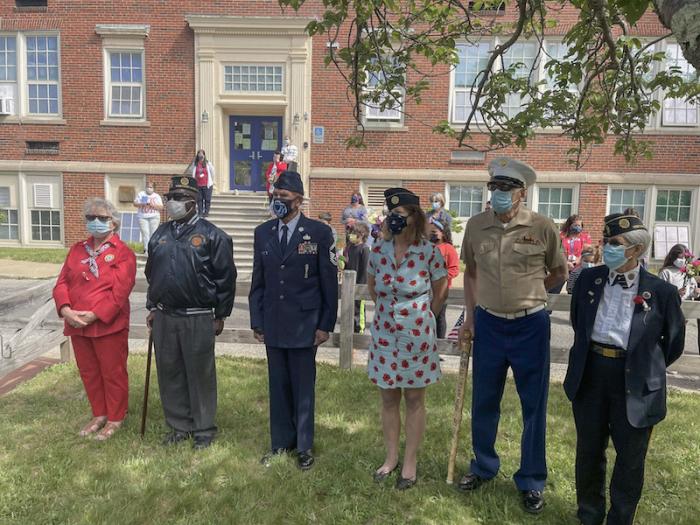 Veterans joined the event at the Tisbury School.

In Tisbury, the ceremony was also modified. Instead of marching to the Vineyard Haven Harbor as per tradition, the entire school, from kindergarten through eighth grade, gathered around the flag pole on school grounds. Flowers were delivered to the sea by two student emissaries: Avery Mulvey and Tayna Silva.

In Chilmark, schoolchildren began the morning at the United States Coast Guard station in Menemsha, where they met with members of the Coast Guard, asked them questions and heard about the daily operations at Station Menemsha.

According to Chilmark School principal Susan Stevens these types of interactions are important. 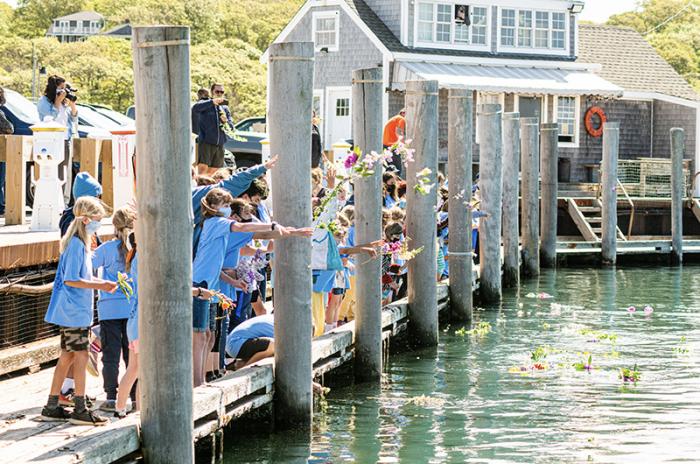 Chilmark School students mark the moment by tossing flowers into the Menemsha Harbor.

Seaman Zaynah Rodriguez said she hoped the students will feel more comfortable going out onto the ocean after the event.

“If they want to go out on the water, they can feel safe doing so knowing that we are here to help them,” she said.

Students then walked to the harbor where they recited original poetry written for the occasion. The kindergarten class presented a poem they wrote entitled, A Memorial Day Haiku. It read: “Your Sacrifices/Do not go unnoticed here/Forever Grateful.”

For Machinery Technician Quinden Griner of the Coast Guard, the poems were the highpoint of the event.

“I got goosebumps,” he said.

Moses Thomson played Taps to bring the ceremoney to a close. After the concluding notes, the students tossed bundles of rhododendrons and lilacs into the water to honor all veterans who died in combat.