Gathering at the Ducther Dock celebrated the occasion.

The trust, which aims to protect the Island’s small-boat fishing industry, has been working to create a community-based wholesale fish buyer for the past year and a half, said trust president John Keene. The ambition became reality when the trust signed a lease with the town of Chilmark in January securing the location, the former site of the Menemsha Fish House.

Fitting the occasion, Mr. Keene sliced a red dock line with a filet knife late Tuesday afternoon on the Dutcher Dock, flanked by trust executive director Shelley Edmundson and director of operations Peter Lambos while a small gathering of Islanders looked on. Champagne and sparkling apple cider was served in quahaug and oyster shells. After the ribbon-cutting ceremony, guests had the option to enter and look around the building.

The Fish House had been one of the largest wholesale fish distributors on the Island, before closing in November 2020.

Ms. Edmundson told the crowd how difficult the closure had been on local fishermen, and said it created “a risk and a threat to the commercial fishing community here” because it left fishermen with no place to offload their catch.

She also thanked the crowd for helping make the trust achieve its goal through their fundraising support. “Thanks to everyone here, we were able to successfully raise over $550,000 during the winter and during the pandemic,” she said. 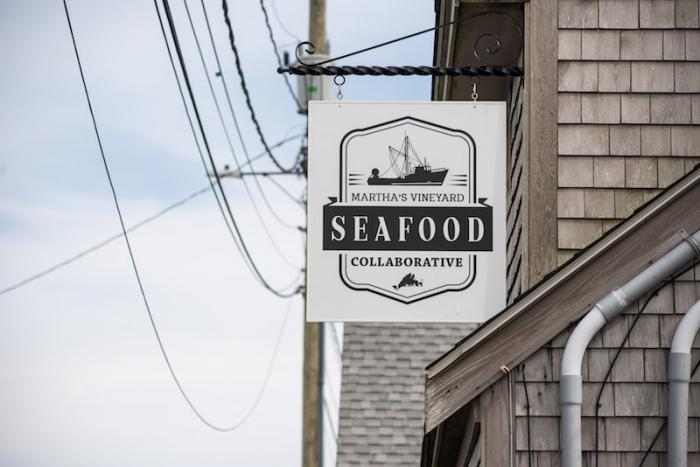 Back in business with wholesale fish operation, this time as a nonprofit collaborative.

Mr. Keene explained the preparations that went into getting the collaborative functioning. “We negotiated a deal with the previous owners to buy their leftover equipment, and then we raised money to purchase additional equipment,” he said. “We cleaned up the building and got new state and federal licenses to sell wholesale, which took a lot of time.”

Despite the labor intensive process, Mr. Keene underscored the key role a wholesale retailer will play in maintaining the vitality of Menemsha as a working waterfront.

“Without a place to sell your fish, the best day ever won’t mean a thing,” he said. “The industry will just go flat without places like this to distribute and sell your catch.”

He added that after the closure of the for-profit Fish House, the trust hopes to create “a different dynamic” by opening a nonprofit retailer in its place.

Mr. Keene said the Menemsha fishing community is excited about the collaborative. “The reaction has been very positive,” he said.