At the Martha’s Vineyard Public Charter School on Saturday, graduates from the classes of 2020 and 2021 walked across the stage together in a combined ceremony to celebrate two senior classes affected by the pandemic.

Charter school director Pete Steedman described the students as a talented and resilient group who have overcome a lot and achieved even more. Mr. Steedman said the graduates encapsulated the charter school spirit, especially as the school celebrates its 25th anniversary this year.

“Twenty five years ago the idea of a charter school in West Tisbury was a bold experiment…The idea hatched in many rooms and kitchen tables across the Island,” he said, addressing the graduates. “Those original founders hoped that the school would produce graduates like you — creative, independent with a deep commitment to social and environmental justice. You are proof that this bold experiment worked as designed.”

The graduation, which included song, speech and plenty of pomp, began with the presentation of the school gifts to the graduates containing cards, chocolates and voter registration cards. The gifts were bestowed by a faculty member, a twist on the tradition of the younger students doing the honors.

English teacher Sarah Smith also presented each graduate with an individualized award and accompanying book, tailored to their experiences and accomplishments at the school. Matt Gonsalves received the Road Less Traveled Award for his choices at every “fork in the road” and Kylie Fauteux received the Friend Award, named for cartoon jellyfish, for her colorful personality. 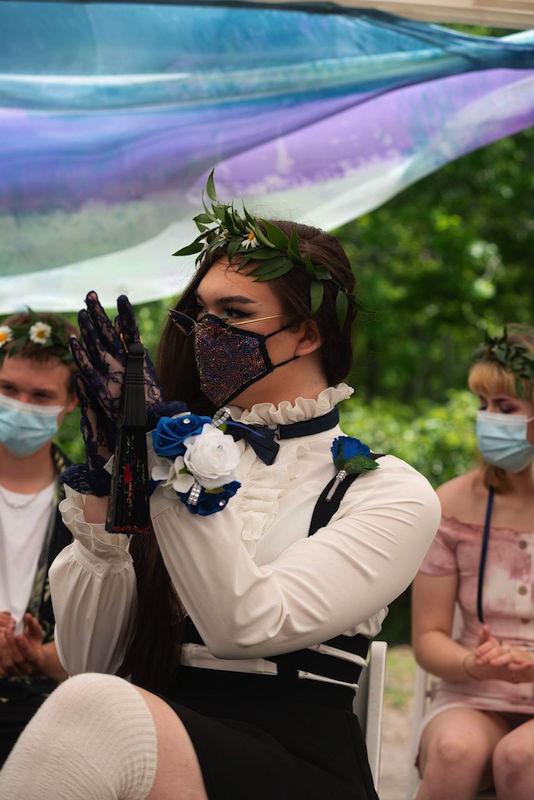 Ms. Hagen, who was chosen as the student speaker, delivered an emotional speech about her 13-year education at the charter school, touching on the losses the class suffered through the pandemic and their triumph through the year. Ms. Hagen also reflected on the support she received at the school in the wake of her mother’s death, who taught at the school years ago.

“There is one person who isn’t here who I’d like to thank — my mother. If she had never taken a job at the charter school I never would have grown up on Martha’s Vineyard and I certainly wouldn’t be here today,” Ms. Hagen said.

At the close of her address, Ms. Hagen presented the class gift to the school, an elegant pale blue flag designed by her. The flag pictures six pillars, a nod to the school’s six founding principles, with a shooting star arcing above them.

The audience received the flag with a teary standing ovation.

The commencement address was delivered jointly by science teacher Jane Paquet and former math teacher Deborah Cutrer. In a quippy, upbeat speech, the two reminded each member of the two classes of their accomplishments, as well as their smaller moments, like playing guitar in the hallway and performing drag for the community. 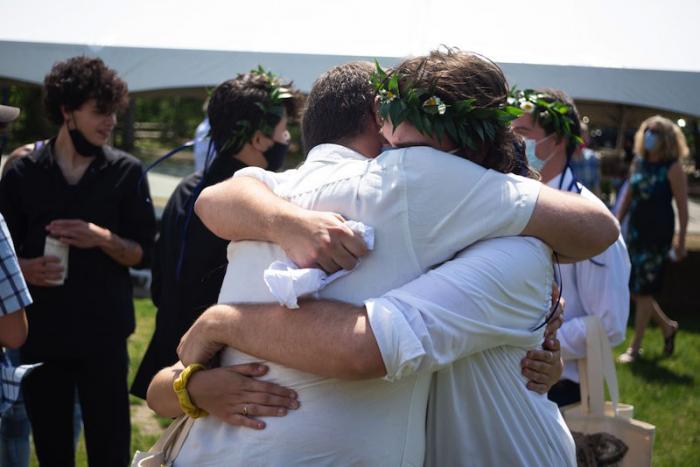 The two ping-ponged back and forth throughout their address, teasing affectionately as they went. They concluded by singing a string of school songs to the graduates, with audience members joining in.

Teachers also noted the challenges of the pandemic, lauding both class years for their resilience through it all.

“The past two years have not been kind to your class, you’ve given up a lot . . . yet you persevered and maybe, just maybe, as a charter school student you were prepared to meet the challenges of this moment because of [your] strong foundation,” Mr. Steedman said.

At the ceremony’s close, president of the board, Steve Nierenberg, and Mr. Steedman conferred the graduates with their diplomas, chuckling as the graduates each took different routes from the podium back to their seats.

“Always their own path,” Mr. Steedman said with a laugh.