A Tisbury septic hauler removed two massive tanks on Monday that had been illegally buried off State Road in Vineyard Haven, bringing to the surface nearly 20,000 gallons of waste — along with a larger Islandwide septic removal problem.

The tanks, buried by Maciel & Sons Inc. this winter off High Point Lane, were discovered by Tisbury health agent Maura Valley late last month after she received an anonymous tip. Under state law, storage of waste from septic tanks must be above ground and on wheels.

Septic haulers face the problem of nowhere to store pumpouts before transporting them off-Island.

— Tisbury board of health

According to Ms. Valley and Mike Whiteside, an environmental engineer with the state Department of Environmental Protection who was present on site, the tank removal went well with no apparent leaks or contamination.

“They were fully intact, and we didn’t notice any leaking at all,” Ms. Valley said, referring to the tanks, which are the type normally attached to the back of a truck.

The Tisbury board of health had ordered the tanks removed and has not scheduled a hearing to consider further penalties.

But the removal of the massive tanks — 8,000 and 9,000 gallons respectively — from a gaping cavity has also served to highlight the inadequate septic pumpout and waste removal infrastructure on the Island.

“Right now, it doesn’t look like you can really dispose of septage on the Island,” Tisbury health agent Maura Valley said. “The pumpers have to truck their septage off.”

The problem began last summer when the Edgartown wastewater treatment plant — the largest on the Island — dramatically curtailed its capacity for accepting septic pumpouts, only allowing emergency pumpouts for residencies and businesses.

The policy change was partly in response to the pandemic’s impact on the treatment plant, as wastewater flow from restaurants and businesses plummeted, making large additions of septage — a much more highly concentrated form of waste — unfeasible for treatment at the plant.

After ordering a comprehensive wastewater capacity assessment by the consulting firm Tighe & Bond this year, the Edgartown plant is now accepting a maximum of 4,000 gallons per day of septic pumpouts from town, along with municipal buildings, tight tanks and porta-potties Islandwide.

The current measures — also the result of a vastly overburdened treatment plant according to facility manager Bill Burke — have created a tough new reality for Island septic haulers. “When I arrived here to start managing the plant, I immediately noticed that the plant was taking way too much septage,” Mr. Burke said. “The sludge looked terrible. The microscopic life inside the sludge — the mixed liquor, we call it — was way out of proportion to any normally performing sludge,” he added.

Only the three down-Island towns have municipal sewer systems. The Oak Bluffs plant, significantly smaller than the Edgartown plant, does not accept septic pumpouts. The Tisbury plant, also small, was previously accepting minimal amounts of septage but is no longer accepting any, according to Ms. Valley.

The rule of thumb for operating a treatment plant is that septage should make up no more than three per cent of the plant’s total flow, Mr. Burke said. But on certain days, he estimated Edgartown was accepting close to 30,000 gallons of septage — about 15 per cent of its flow. On peak summer days when the plant was nearing its maximum 750,000-gallon flow capacity, Mr. Burke estimated that it was accepting close to 40,000 gallons of septage daily — more than double the suggested amount.

“The plant was never designed to be an Islandwide septage receiving facility,” he said. “That was the traditional approach, and it never should have been abandoned.”

Now as the pandemic ebbs and wastewater flow at the plant has swelled to almost 80 per cent of pre-pandemic levels, Mr. Burke said there are no plans to change the strict limits on the amount of septage the plant can receive. 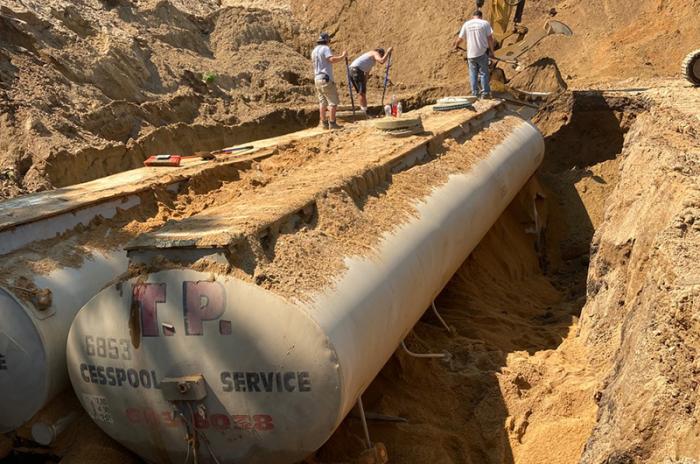 — Tisbury board of health

As a result, Island haulers are scrambling to truck thousands of gallons of waste pumped from residential septic systems off-Island. But logistical issues abound.

“It definitely affected our business,” said Jay Araujo, owner of Jay’s Septic Service, speaking of the policy in Edgartown to limit pumpout waste. “We kind of saw the writing on the wall where we had to find a different place to dump and put infrastructure in place to do that.”

Mr. Araujo has installed a 21,000-gallon storage tank, called a frac tank, at the airport business park, where he legally stores septic pumpout material before transporting it via tractor trailer to a treatment plant in New Bedford.

The truck can carry 9,000 gallons at a time. With high demand for pumpouts, Mr. Araujo said his company is making trips off-Island every day from May through October.

The cost of septage disposal off-Island is significantly lower, but the added expense of transportation, as well as the cost of contracting with treatment facilities, inspections and pollution insurance have driven costs up, haulers said. The hour-long commute to New Bedford day after day can also take a heavy toll on equipment.

“[It’s] all of those things are behind the scenes that you don’t see,” said Mr. Araujo, who has tried to keep his pricing as low as possible. He has increased his prices from 60 to 68 cents per gallon, he said.

Of the Island’s seven haulers, only Mr. Araujo and Maciel & Sons have created a temporary storage and off-Island pumping plan. Kane Araujo of Araujo Brothers is working to get permitting, according to Edgartown health agent Matt Poole. Others have simply curtailed pumping outside of Edgartown.

“We’re busier than we’ve ever been and we’re almost having trouble keeping up,” said Jay Araujo, noting slower service times as a result of high demand.

The recent bottleneck portends longer-term problems too, as all the Island treatment plants reach or near their capacity.

In short, the Island has more waste than it can accommodate.

The Tighe & Bond report this spring found that between 2018 and 2019, the Edgartown treatment plant hit capacity on a few days during peak season in the summer.

Future development, including new home construction with sewer hookups, could put the plant above its permitted capacity in the next four years, the report said.

About 1,450 of the approximately 17,000 buildings on the Island are connected to a town sewer, according to Mr. Burke. He said in Edgartown requests for town sewer hookups, driven by new homeowners, have increased 100 per cent. “It could take five years [to reach capacity at the treatment plant], it could take 10 years,” he guessed.

Limiting capacity at the Edgartown facility is environmentally important too, Mr. Burke said, because the plant lies in Edgartown Great Pond watershed.

“When you take all the septage from all the other towns, we eliminate 98 per cent of nitrogen, but the other two per cent is going to the Edgartown Great Pond watershed,” Mr. Burke said. “That would still make Edgartown a net importer of nitrogen Islandwide.”

“We’re kind of making [off-Island dumping] a long-term solution because I don’t see any other towns building a treatment plant and I don’t see the towns that do have treatment plants expanding them,” said Mr. Araujo. “I’m just trying to keep my business afloat, and this is the best way I know how to do it.”

For homeowners, that might lead to deferred septic maintenance — causing more worry for health agents.

“A lot of people might make the decision not to do regular pumpouts. In the long run that could lead to a lot of problems,” Ms. Valley said.