On one side of the half-court line stood Ryan Araujo, a promising, five-foot, eight-inch eighth grade Vineyard basketball star, his bright purple jersey and shorts matching nicely with the Niantic Park hardtop.

Driving to the net.

On the other stood the bright white jersey-wearing number 11 from Dana Barros Basketball Club, an elite basketball training program headquartered in Stoughton and run by the former Celtics star.

In the middle stood Jay Schofield, the legendary, 79-year-old hall of fame Vineyard basketball coach and founder of the historic Niantic Park league, who had spent much of the past half-century bringing together top-level talent from across the state to play on the sacred court in the heart of Oak Bluffs.

All three bent their knees and readied their arms. They looked down at the words “truly blessed” tattooed onto Coach Schofield’s wrist, the weight history felt on the court beneath their feet.

The coach had thrown thousands of tip-offs in his career, but Saturday’s was special, honoring the 50th anniversary of the Oak Bluffs summer basketball league that he had started in 1970.

Over the decades, the league had taught the fundamentals of the game to myriad Vineyard kids — both year-round and summer — who found solace, friendship and a future on the court that they might not have had off of it. But the league was about more than basketball, eschewing the race, class and gender divisions that the sport had often defined, and instead embracing the multiplicity of backgrounds and beliefs essential to the Island — and specifically Oak Bluffs.

A kaleidoscope of nearly 100 former players — many now teachers, coaches, counselors and parents themselves — gathered at Niantic Park Saturday, their eyes trained on the trio in the middle of the court and the coach they had known since childhood. 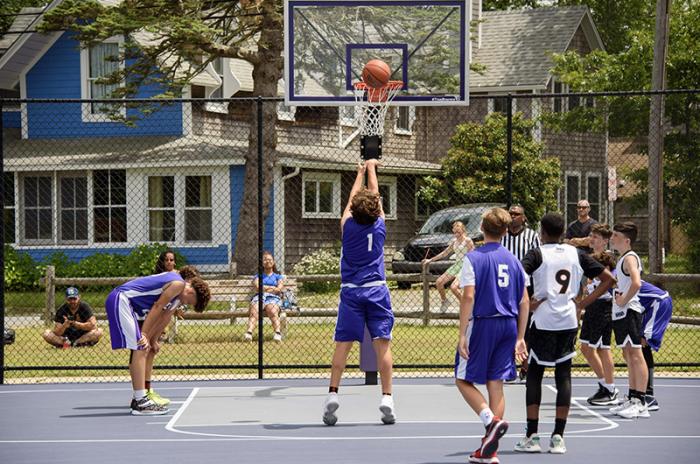 The Dana Barros club team had traveled to the Island to challenge a Vineyard eighth grade all-star team in an exhibition game to honor the league’s anniversary. Coach Schofield steadied himself, tossing the ball high in the air. Both players leaped, but Ryan Araujo leaped higher. Vineyard possession. They’d hardly give it up all game, running the court in a dominant performance. The 50th year of Niantic Park basketball was officially underway.

In a speech before the tip-off, Coach Schofield talked about the league’s origins and history, saying it started in 1970 with a push from the police chief Dana McCarthy to put in a basketball court. But the chief knew nothing about the sport, recruiting Mr. Schofield from the high school to run the league.

“Basically they decided they were going to have no kids get in trouble over the summer,” Coach Schofield said. “So what they did was they built a real tall fence all the way around. The purpose of that was to keep the dogs off the court, the balls inside the court, the parents outside the court, and the players inside.”

The league was divided into three different age groups, ranging from eight-year-olds to elite high school and college players. Play was structured around lessons in the morning and independent games and pickup in the afternoon. Cars would park four rows deep for night games, horns honking as they cheered on players. Coaches remained on the sidelines, leaving the court to the kids.

“We insisted on all kids coaching themselves,” Mr. Schofield said. “There weren’t any coaches at all. No coaches. During timeouts, they always looked for leadership on their own.” 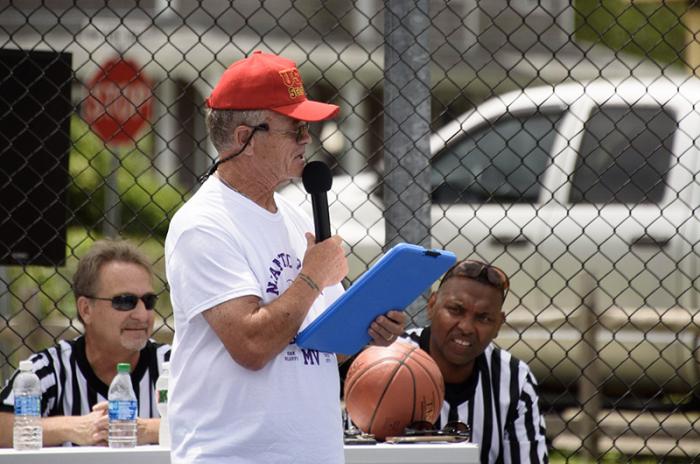 Legendary Coach Jay Schofield founded the program half a century ago.

But Coach Schofield couldn’t stay on the sideline too long. The league quickly developed its own rules — written and unwritten — that hammered the fundamentals into all players.

A former Marine turned war historian, Mr. Schofield came to basketball with a disciplined yet academic eye, the patience of a monk and the focus of a drill sergeant. He never swore, and nor did the players. He preached team defense, two-handed catches and passes, and required everyone to play a minimum of two periods during games, regardless of their skill. Free throws were taken from inside the key so form didn’t break down. Last shots were always taken with exactly six seconds left, giving enough time to rebound and put-back a miss.

When Keith Jackson, a flashy player and avid dribbler, didn’t pass to an open teammate on a fast break, Coach Schofield blew the whistle.

“That’s a hog call,” Coach Schofield said. “If a teammate was open in front of you, you had to get him the ball.”

“He never did it again,” he added.

Bob Jennings, an aggressive scoring guard who played on the Niantic Park court the first day it was built and became a two-time player of the summer, as well as a counselor and director for a decade after his playing days, remembered Coach Schofield teaching him how to step into rebounds, allowing him to box out better than centers from off-Island.

“He wasn’t my coach. He was my mentor,” Mr. Jennings said Saturday.

Todd Hollister remembered Coach Schofield’s sense of humor, saying it was on full display during halftime when the Vineyard was down big to a weaker Chatham program. 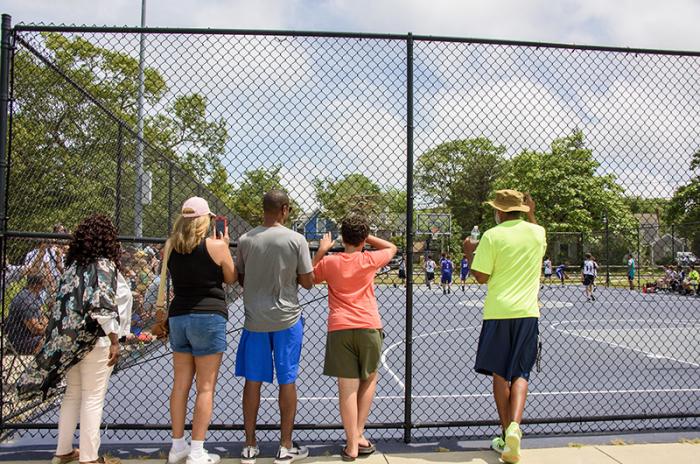 Spectators have long been part of the scene at Niantic Park.

Maxims developed out of the coaching lessons on the court. Coach Schofield’s goal was to “catch kids doing something right.” Praise was shouted, but criticism was whispered. He’d say “cookie jar” to indicate the proper shot follow through. Players practiced their way onto the team and played their way off it.

“We’re going to be good in a few years,” Coach Schofield noted.

Saturday’s crowd was multigenerational too. Watching from the sidelines was David Araujo, Ryan’s father and director of the Island Intervention Center with Martha’s Vineyard Community Services. Mr. Araujo grew up playing on the court. He watched his son dominate it Saturday, and praised the cultural significance of the league.

“[Ryan] can come here and play against kids who are better than him. He can play against kids of color,” Mr. Araujo said. “One of the things this taught me, and hopefully will teach him, is how to walk in and out of white and black society, and build relationships. I have friends who I played with when I was eight and I’m still friends 40 years later.”

“This league changes lives,” he said. 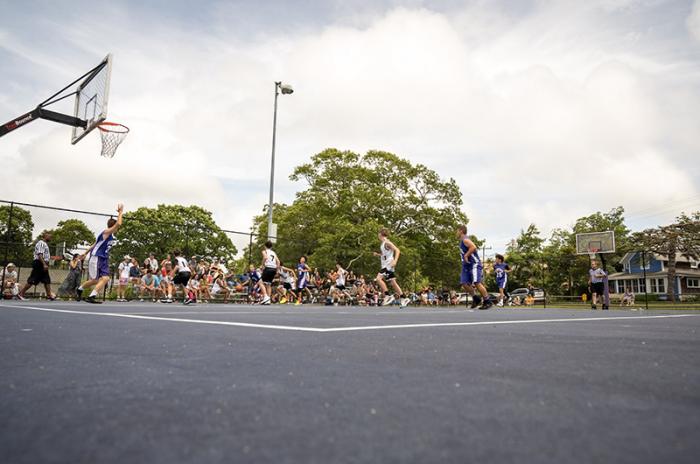 The league has been about more than basketball, embracing the multiplicity of backgrounds and beliefs essential to the Island — and specifically Oak Bluffs.

The Vineyard team won their game 49-22, with Xavier Clarke putting up 15 points. In a second game, a team of Vineyard freshman and sophomores, including center and leading scorer Matheus Rodrigues, got off to a 22-3 lead and won 67-28 against an eight-grade team from the Dana Barros Academy.

The scoreboard stayed on until long after the game ended. Coach Schofield said that was also part of tradition.

“If we won and were home, we’d always leave the score up,” Coach Schofield said. “We’d act like we forgot. But we didn’t.”

Throughout the 50 years, Coach Schofield’s maxims made their way off the court too — including the most important one.