Driving along the seawall in Vineyard Haven on Saturday, passersby were greeted with a human chain united against domestic and sexual violence. Participants in the 10th annual Seawall Stand stood in solidarity against gender-based violence, with many honoring women in their own lives by displaying signs bearing their names.

The event is organized by Connect to End Violence, a program of Martha’s Vineyard Community Services, and started as a men’s initiative to address gender-based violenc. But everyone is welcome to participate, said Jennifer Neary, program director at Connect to End Violence, and each year the event has grown. On Saturday morning women stood together with a larger group of men, all united in their mission to bring awareness to and combat sexual violence on the Island and beyond.

“Domestic violence work has traditionally been thought of as women’s work and a woman’s issue,” Ms. Neary said. “So this event is great because it targets men, and this is a great opportunity for them to engage and participate in a way that really sends a strong message.”

Men wrote names of women in their families they were honoring.

Among the participants were members of the Sharks baseball team. The players said that as male college athletes they felt they had a responsibility to spread awareness about these issues.

“I think this is all information we can gather together and bring back to our own individual schools and help benefit each school as a whole,” said Ryan Vanderhei, a senior at the University of Kansas.

The baseball players also acknowledged their position of influence.

Representatives of local law enforcement affirmed their dedication to this work. 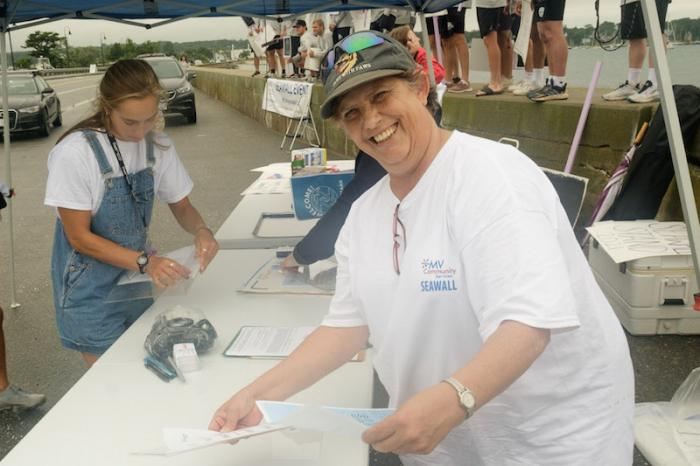 Max Sherman, a sergeant with the Tisbury Police department, has participated in the stand every year since its inception and brought his son Xavier and his daughter Nora with him.

“It’s important that we show that we’re more than just police officers,” he said. “We’re humans and we have sisters and mothers and wives that we want to feel safe.”

He added that he brings his children to help educated the next generation.

“I’m starting to explain to them that not all kids and families are given the same opportunities that they have,” he said.

“It’s not just an individual agency that’s trying to make a difference. It’s the entire community coming together,” he said. “If they have different people from different agencies coming together to support this message, it has a stronger influence.”

He said he hopes the stand triggers reflection and change among Island men.

“We need men to stand up and stop that culture — the locker room talk, the jokes, the catcalling, this unspoken belief that it’s okay to objectify a woman, to treat her poorly,” he said.

He hopes that passersby join in the event in upcoming years.

“It would be great to get to the point where we do not have any more room along this entire seawall from the bridge down to Packer’s,” he said.