Streams of visitors bearing white carnations made their way to the Edgartown Lighthouse Saturday morning. Some strolled the base of the lighthouse foundation, others looked out at waves beyond the beacon, but all came for the same reason — to mark the children’s memorial annual ceremony of remembrance.

Shells, flowers and remembrance on a clear September day overlooking the outer harbor in Edgartown.

The memorial was conceived by Islander Rick Harrington after the death of his son Ricky in 1995. Today the names of 889 children are engraved on cobblestones around the base of the historic lighthouse overlooking the outer harbor.

The annual September ceremony was begun in 2002 by the Martha’s Vineyard Museum and has grown substantially over the years.

Due to pandemic concerns, this year’s ceremony was transformed into a daylong event of remembrance, with visitors streaming in over the course of the morning and early afternoon to place flowers and seashells on the stones and share quiet moments of reflection.

On a sunny, blustery day, museum staff stood on site, handing out ceremony programs and maps to the inscriptions as visitors arrived.

“This is one of the few places where there is a children’s memorial like this,” said interim museum director Heather Seger.

Instead of the usual remarks, readings and music that mark the ceremony, the museum published an online video to mark the day, featuring remarks from Ms. Seger, music and a reading of Lisa S. Satcher’s poem, A Lighthouse in the Distance.

“We wanted to find a way for families, friends and community member to still gather and mark this special day, whether it’s in person down at the memorial or from the safety of your home,” said Ms. Seger in the video. “Although we cannot bring back the hundred of children whose names cover the base of the lighthouse, we know they are constantly illuminated by the beacon above, which will never dim.” 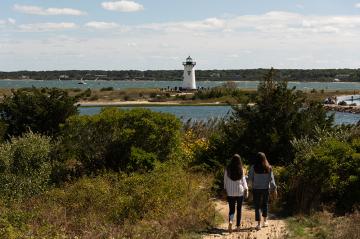 Susan Dobuler, a seasonal resident who has a stone at the memorial honoring her late son, said she visits the spot a few times each year, and returns for the annual ceremony.

“It’s a wonderful way to sort of commune with other parents and children,” she said. “I don’t know the other people who come, who’ve lost children, but I feel like I do have something in common with them.”

Lee Magnarelli, who also lost a son, said she hasn’t been to the ceremony in a few years but returned this September to support two friends who recently placed a stone of their own.

“It’s meaningful for me because he loved the Island,” Ms. Magnarelli said of her son. “It’s just a little touch of remembrance.”

Robert and Eleanor Schaefer, who came to honor their son Scott, echoed the sentiment. “Martha’s Vineyard was important to Scott,” said Mr. Schaefer. “It’s important to be a part of the Island.”

Some who gathered expressed disappointment at the changes to the ceremony this year and said they looked forward to a return of the traditional event next year.

“Something’s different because there’s not a crowd,” said Ms. Dobuler.

But the enduring theme of remembrance remained unchanged.

“It’s nice to be with people we know, who care about us and are here to share,” said Ms. Schaefer.

Ms. Dobuler agreed. “The bottom line is that we’re all here,” she said.

2 firefighters injured while responding to fire in Wareham - News - capecodtimes.com