Forced to delay opening this spring, many Island businesses are using an unusually busy fall as a springboard into the darker months, with summer retailers and restaurants extending their seasons and year-round stalwarts planning to expand off-season hours.

Interviews conducted this week with 19 retailers and food businesses up-Island and down elicited a range of plans for the coming months, but many owners and managers said they will keep their doors open as long as possible to take advantage of the fall’s unexpected windfall.

“Normally we’d all be closed by now. By Columbus Day, it’s over up-Island . . . because there isn’t enough business to make it viable,” said Jenna Petersiel, owner of the Chilmark Tavern, who hopes to continue the restaurant’s take-out operations through December.

“This year, a lot of people said they were sticking around, and I had some employees that wanted to stay, so we decided to give it a try,” she said. “I have no idea what to expect because everything could change in a week, but the plan is simply to do it until the end of the year.”

Outdoor dining continues, but colder temperatures are on their way.

Down-Island, too, seasonal restaurants and cafes with typical October closing dates have opted to eke out a few extra weeks of business, taking cues from the weather, ferry service and foot traffic.

At Back Door Donuts, manager Tyler Heineman said the cafe and doughnut shop will push on until Nov. 9 for the first time, thanks to steady business and a recent rise in wedding catering. According to Mr. Heineman’s estimate, September revenue was up 20 per cent from last year, despite a slower summer.

Two new restaurants in Oak Bluffs, Seaweeds and the Pawnee House, say they will keep their doors open until the end of December or early into the new year, hoping to make up for the spring season’s lost business.

“Because of the Covid delays, we didn’t get to open until mid-August, where we were hoping for more like June,” said Alex Cohen, co-owner and general manager of Pawnee House. “The silver lining is that we’re kind of experiencing what I would describe as an extended season . . . we’ve gotten busier and busier every week, even though we’re going more and more into the fall.”

The presence of more people on the Island has propelled the decision to stay open, while factors out of owners’ control — like weather, infection rates and staff availability — keep the future uncertain, Island proprietors said. 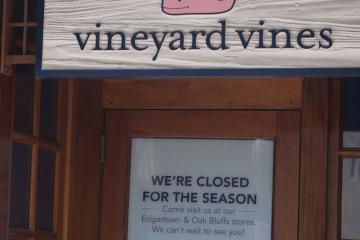 For some, the best option was to close for the season.

Recent provisions by Edgartown selectmen have also extended seasonal liquor licenses in that town weeks past the usual November deadline into December, allowing restaurants and bars to stay open well into the winter months.

The extensions come on the heels of a summer that also exceeded expectations for many Main street retailers. “It was kind of like baptism by fire, everyone was just thrown right into it,” said Erin Ready, executive director of the Edgartown board of trade. “But people were here and people and businesses made it through and made it work.”

With steady sales, certain year-round businesses — particularly those that have fared well in the pandemic selling art, home goods and big-ticket items — have made plans to expand their regular off-season hours to accommodate demand.

Elizabeth Eisenhauer, co-owner of the Eisenhauer Gallery in Edgartown, said she plans keep the gallery open five days a week through the end of month, instead of the usual three.

“We’re kind of acting as though it’s June, gearing up again,” she said. “Typically, this time of year, we’re sending things back and we’re bringing in 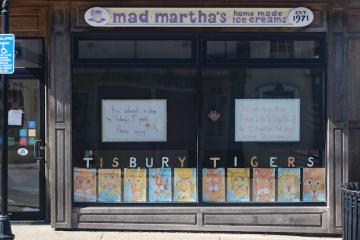 Faith in the community.

smaller works for holiday purchases, but right now . . . with the increase sales that we’ve seen, we felt like it was necessary to bring in a new collection in the off-season.”

At Granite Stores of Martha’s Vineyard, store manager Andy Krickl said after a nonstop summer and fall, the store is looking to expand its current 8 a.m. to 4 p.m. hours to support buyers who work during the day.

In Vineyard Haven, business has been strong for most Main street storefronts, said Sarah York, manager at CB Stark Jewelers and head of the Tisbury Business Association. So much so that new businesses, like luxury sports apparel store called Sideline, are slated to open in the upcoming months, Ms. York said.

“My guess is that if you compared last quarter 2020 to last quarter 2019, all things being equal with the population being up as it is, I think that this season would be much more robust,” said Christine Todd, president of the Oak Bluffs Association.

While a robust fall has brought relief for some, the lower temperatures and diminished ferry service ahead will bring a new set of hurdles.

And many retailers and restaurants have been severely short-staffed since early in the summer, when travel restrictions on foreign labor severely curtailed the Island work force. Businesses who operated at nearly half staff all summer, will be unable to retain enough employees to make it through the off-season, owners said.

With uncertainty all around, businesses are doing their best to adapt to an ever-changing landscape, but as seasonal milestones from Thanksgiving fairs to Christmas tree lightings loom, one thing is clear — almost nothing looks the same.

“[We’ve] has been here for 103 years,” said Steve Bernier, owner of Cronig’s Markets. “Going back to World War II, I believe this will be the first Thanksgiving we will not be taking turkey orders. Simply put, because we have no idea what’s going to show up.”