But he got a hankering during the pandemic, and his neighbor picked up a steak for him at Cronig’s.

Chloe Combra is part of a team collecting ticks this summer around the Island for further study.

“I made it on the grill, and ate it,” Mr. Karney said. “A little while after that, I was watching TV, and I got this weird pain in my stomach.”

By the time Mr. Karney stood up to put his plate in the sink, the room was spinning.

Mr. Karney, who has dealt with allergies all his life, drove himself to the Martha’s Vineyard Hospital emergency room in a heavy sweat, welts spreading across his body. Familiar with tick bites and tick-borne illness, Mr. Karney knew this was different. He asked to be tested for a rare allergy to red meat he had heard about that had been shown to develop from Lone Star tick bites.

The test had to be sent to Missouri for analysis. But sure enough, days later he got his results: positive.

“It’s like when Lyme first came about. People are not very aware of it,” Mr. Karney said. “I was surprised . . . my primary [care doctor] said, I’ve heard of this before, but you’re the first patient I’ve seen who has it.”

About a year later, and Mr. Karney is not alone. Vineyard doctors, allergists and biologists have identified at least a dozen Islanders who have also been formally diagnosed with the allergy, adding a frightening, largely unstudied new syndrome to the already dizzying array of tick-borne illnesses facing Vineyard residents.

Known as Alpha Gal syndrome, the allergy was first recognized in the southeastern United States more than a decade ago. But as Lone Star ticks have rapidly proliferated northward, so too has the allergy, following the dangerous arachnids across the country — and the Vineyard Sound.

Transmitted through a carbohydrate molecule called alpha-gal that gets secreted in Lone Star tick bites, the allergy triggers an immune response that can produce mild to severe allergic reactions to red meat, including pork.

Milder symptoms include rashes, hives, itching, stomach aches and sweating. Severe symptoms range from angioedemia, or swelling of the lips and mouth, which is considered a medical emergency, to life-threatening anaphylaxis. Reactions can be triggered by eating, or in certain rare cases, even smelling red meat. There is no known treatment, other than to avoid mammalian meat products. It is unknown how long the allergy lasts.

Dr. Karen Casper, head of the Martha’s Vineyard Hospital emergency room, said in an interview that while the syndrome remains rare, she has seen about two patients in the past three years come into the ER for treatment. Allergist and otolaryngologist Dr. Edward Caldwell, who practices in West Tisbury, said he has treated approximately 10 Vineyard patients in the past year and a half who have received laboratory confirmed positive tests.

“It’s here,” Dr. Caldwell told the Gazette in an interview. “It’s a little hard to tell how prevalent it is, because it is a fairly new tick-borne illness for the Island. But unfortunately, I think it is going to become more prevalent. The Lone Star ticks seem to be thriving here, and they are a fairly new arrival.”

According to Richard Johnson, a biologist and head of the Island’s tick-borne illness prevention initiative who conducts regular yard sweeps across the Island, Lone Star ticks are more than thriving. In five short years, the fast-moving, aggressive species has become the dominant tick on the Vineyard, spreading inward from its initial outposts on Chappaquiddick and in Aquinnah.

Mr. Johnson said he has found Lone Star ticks while doing yard sweeps in down-Island towns this year, including 20 on one sweep in Oak Bluffs — noticing for the first time their ubiquity Island-wide.

“Three years ago I would have told you they weren’t in Oak Bluffs,” Mr. Johnson said. “Now, every place we go, we are finding them.”

To make matters worse, the omnipresence of the Lone Star tick hasn’t done anything to push out deer ticks, or the diseases they carry. Dr. Casper said the incidence of tick-borne illness at the ER has grown, with nearly 600 Island patients testing positive for Lyme disease between June 30, 2020 and June 30, 2021.

Although Lone Star ticks do not transmit Lyme disease like their deer tick relatives, they are responsible for a different cocktail of unsavory, latinate pathogens, including ehrlichiosis, tularemia and Southern-tick associated rash illness, or STARI. The CDC recently included the red meat allergy as an addendum to the Lone Star’s official “Tick ID” primer.

But unlike other tick-borne illnesses, the state Department of Public Health does not track the syndrome because it is technically an allergy, rather than a disease, making its true prevalence nearly impossible to gauge.

Because of the growing ubiquity of Lone Star ticks, Mr. Johnson suspects that the Vineyard is, and will continue to be, a hot spot for the allergy.

“There’s probably no place else in the state that’s dealing with this issue,” Mr. Johnson said. “We’re at the forefront of it.” 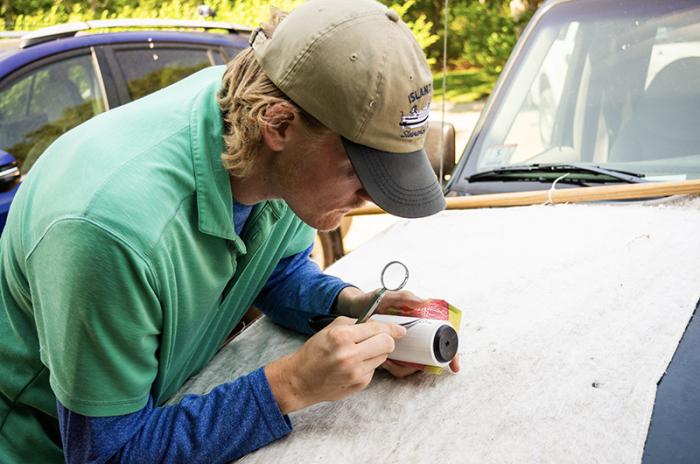 Almost all known Vineyard patients have a history of tick bites, and a history of allergy issues, experts said. But harder science on Alpha Gal syndrome remains elusive, leaving even the medical community uncertain about the allergy’s prevalence, biology and impact. And for most patients, the first symptoms come as a surprise, often hours after meat consumption, adding to its dangerousness.

“My gestalt is that it is unusual for somebody to have this type of reaction with zero history of allergy problems,” Dr. Caldwell said. “But most of my patients are coming in, not knowing they had it. They eat steak or pork, get a rash, and then get tested.”

Mammal byproducts also appear in a surprising array of foods, packaging and medical equipment, including gelatin and certain chemotherapy treatments.

Patients span all ages and genders, including children. Becky Cournoyer, who lives in West Tisbury, saw her son Roan, age 12, diagnosed with the allergy in 2018, more than a year after he first started experiencing a variety of symptoms, including stomach aches, vomiting and on one occasion, difficulty breathing.

For a long time, Ms. Cournoyer and her doctors struggled to diagnose the allergy, thinking it might be dairy-related. The Massachusetts General Hospital pediatric allergy panel does not include alpha-gal, and it wasn’t until her Vineyard pediatrician performed the specific alpha-gal blood test that the family got an answer.

“It was really hard to pinpoint,” Ms. Cournoyer said.

Both Roan and Mr. Karney now avoid red meat entirely, and Dr. Caldwell said he prescribes his alpha-gal patients an epipen. With steak off the menu, Ms. Cournoyer said her family has resorted to other dietary options.

“Emu meat is almost identical to beef,” Ms. Cournoyer said. “And so we eat a lot of emu now.”

But as it has become more prevalent across the country, formal and informal support networks for Alpha Gal Syndrome have grown as well. A Facebook group devoted to the allergy has more than 8,000 members, and both Ms. Cournoyer and Mr. Karney said they have benefitted from the help and community, expressing a desire that the allergy becomes more widely known in the medical world.

Mr. Johnson and the tick-borne illness reduction initiative have hired an intern, Grace Newfield, currently in her fifth year of a combined undergraduate and master’s degree program, to conduct public health outreach and research on the allergy. And Dr. Casper said it is on the radar for emergency room specialists and primary care doctors.

“The primary care team is actively thinking about this allergy when people come in with allergic reactions,” Dr. Casper said.

ell expressed concern about the prevalence of the syndrome, and the speed at which it has grown.

“It really kind of popped up,” he said. “It’ll be interesting to see where this is at in three to four years.”

As for Mr. Karney, he is feeling healthy, and never ate much red meat anyway. But he now wears a hazmat suit when he goes out to his garden.

“It changes your life, that’s for sure,” he said.