The storm arrived early Saturday morning and stayed, drenching the Island with rainfall and battering coastlines with gale-force gusts all day. The National Weather Service issued a dangerous weather advisory, with a forecast for winds between 25 to 35 miles per hour and gusts up to 60 miles per hour.

Most ferry service to the Vineyard was canceled by mid-afternoon.

Traditional flood-prone spots on the Island, like the Chappy Ferry in Edgartown, Five Corners intersection in Vineyard Haven and Ocean Park in Oak Bluffs, saw dramatic flooding throughout the morning and into the afternoon.

The Trustees of Reservations have closed Norton Point beach and Wasque on Chappaquiddick to oversand vehicle travel. The Cape Pogue Wildlife Refuge has also been restricted to essential vehicles. 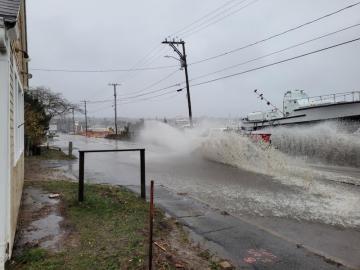 “It will take some sunshine and wind to dry out flooded areas for safe passage,” a post from the Trustees stated.

Eversource reported between 250 and 1,000 up-Island homes without power at approximately 2:45 p.m. Saturday.

Rain is expected to continue throughout the afternoon and evening. The weather advisory remains in effect until early Sunday morning.

The storm is bringing heavy snow to central Massachusetts and northern elevations in New England.